Being eco-friendly starts with the everyday products you use, and that includes gadgets. However, finding green gadgets that actually do the environment good isn’t as easy as it sounds. Fortunately, we’ve rounded up five awesome cardboard gadgets that fit the bill, starting with Art Lebedev’s cardboard USB drive. Continue reading to see more. 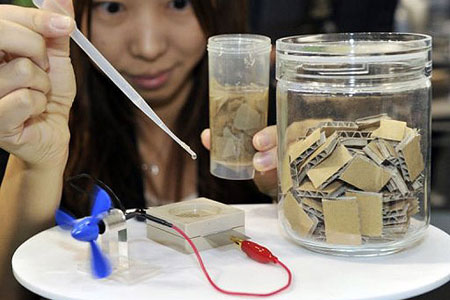 What Sony has come up with is a thin sheet of material called a “bio-battery.” The basic design uses an enzyme to break down sugar and turn it into hydrogen ions and electrons, creating an electric current and water. Bio-batteries like these can run on all kinds of things, from soda to fruit juice, but the problem is that all of these sugary liquids are just so tasty, and given the choice, most people can’t help just drinking their battery power and not powering their batteries with it. 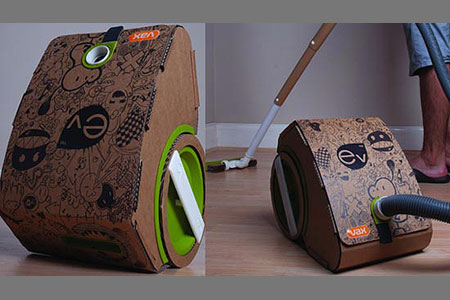 That’s right, the shipping box is the vac’s body. With a little bit of folding, the Vax Ev is ready to go (fun doodle art not included) without any glue or tape. But just because it’s outside is completely recyclable doesn’t mean its motorized parts can’t be green too – the Vax Ev is made from pure nylon plastic using rapid process manufacturing instead of non-green injection moulding, which should make it recyclable as well.

To cut down on waste, all of Asus’ Mini-ITX motherboards will come in a shipping box that also doubles as a PC case. The shipping box will have compartments for adding a hard drive and CD/DVD drive as well as pop-out holes for heat dissipation. We’re all for saving the environment, but cardboard doesn’t exactly provide great ventilation – even if it does have lots of holes.

Rumors are the furniture maker could start selling them in its stores soon. The available specs are pretty sketchy, but apparently it can store up to 40 shots in its internal memory, which you download using the flip out USB jack. It also looks like the thing runs on two AA batteries.

The vehicle’s chassis is constructed out of cardboard and plywood with bio-infused fibers for body panels. But the tiny sustainable beast is powered by a Nexa Ballard Hydrogen Fuel Cell. The team describes the project as an “IKEA style car which could be assembled by slotting the panels together.”

If Laptops Existed 150-Years Ago

5 Mind-Blowing Electric Cars from the Future