There are lots of things that people want, but probably don’t need, including a BMW M9. Fortunately (or unfortunately), the vehicle you see above is just in the design stages and may never see a showroom or show. Continue reading to see more awesome gadgets.

We have a Darth Vader, Luke Skywalker, R2-D2, Stormtrooper and Boba Fett timepiece, all of which feature water resistant leather bands. Of course seeing that these are officially licensed Lucas Film collectibles, it’s no surprise that each watch comes packaged in individually numbered, velvet lined boxes complete with a collector’s certificate.

The bike is powered by a lithium polymer battery with high energy density, but it’s the design aesthetics where this thing truly shines. The ‘Made in Italy’ Cykno electric bike sports a vintage look and feel that is sure to turn the heads of even the most sophisticated gents. The bike is crafted from a blend of premium leathers with plenty of carbon fiber and aluminum used in conjunction with stainless steel for a lightweight ride.

For the first time KTM has made a real effort to protect drivers from the outside elements with ‘conveniences’ that were seen on prior models like the introduction of a windshield, doors, and wipers. This KTM has also been ‘down tuned’ a bit tossing out the 300 horsepower X-Bow R power plant in favor of a more accommodating Audi built turbocharged 2.0 liter. The four cylinder engine is no slouch though, pumping out 285 horsepower along with 310 lb-ft of torque.

This pocket-friendly video recorder features a Super 16mm-sized, 1080p-capable sensor with an impressive 13 stops of dynamic range, an SD slot for expandable storage, and compatibility with Micro Four Thirds lenses. The big deal, however, is the ability to record in Apple ProRes or lossless CinemaDNG RAW formats, capturing far more detail than you’d get from your standard video-capable pocket cam. Expect it to retail for right around $1,000 when it hits the retail scene this coming July. 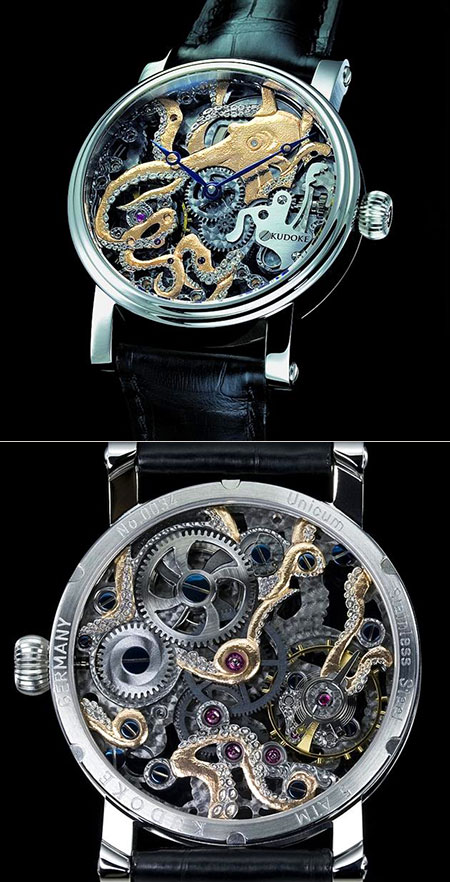 This incredible timepiece was designed by Stefan Kudoke, and features the giant squid like beast intertwined throughout the watch’s construction. It offers mechanical movement that requires manual winding, blue Breguet steel hands, and a beautiful Louisiana alligator or calf leather band to finish things off. You’ll have to shell out just under $10,000 for the watch.