What you’re looking at above is Thonis-Heracleion, a city that was founded in 800 BC. In ancient times, it was a bustling port that was essentially a gateway to Ancient Egypt for Greek ships. Unfortunately, like all things on Earth, it fell victim to the power of nature and sunk entirely by 800 AD. Divers rediscovered this lost gem in 2000. Continue reading for more. 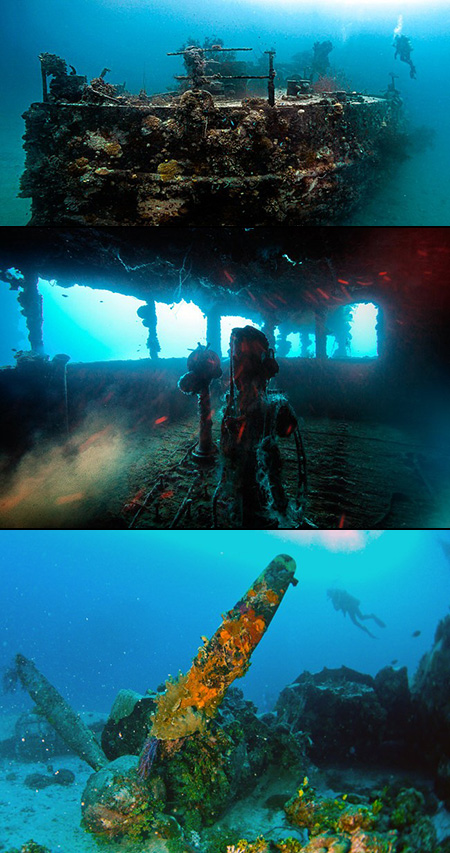 Chuuk Lagoon is a sheltered body of water in the central Pacific. About 1800 km north-east of New Guinea, it is located mid-ocean at 7 degrees North latitude, and is part of Chuuk State within the Federated States of Micronesia. In 1969, French oceanographer Jacques Cousteau and his team explored Truk Lagoon. Following Cousteau’s 1971 television documentary about the lagoon and its ghostly remains, the place became a scuba diving paradise, drawing wreck diving enthusiasts from around the world to see its numerous, virtually intact sunken ships.

The Douglas Dakota (RAF designation) is a military transport aircraft developed from the civilian Douglas DC-3 airliner. It was used extensively by the Allies during World War II and remained in front line service with various military operators through the 1950s. In 2009, the plane was intentionally sunk off the coast of Cas, Turkey, to create an amazing playground for divers. 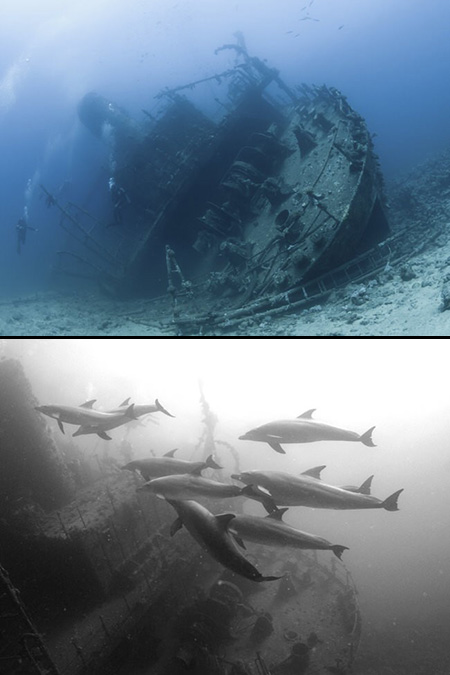 Giannis D was a Greek freighter that spans over 100 meters of length and was originally built in Japan (Shoyo Maru). In 1975, the ship was sold and renamed to Markos and this name can still be found at the vessels hull. It became known as Giannis D when it was sold again to a Greek company. Disaster struck during April 1983 when it was on a trip from Croatia to Saudi Arabia and Giannis D sank when it hit a reef, taking approximately two weeks for the ship to break into two and sink. 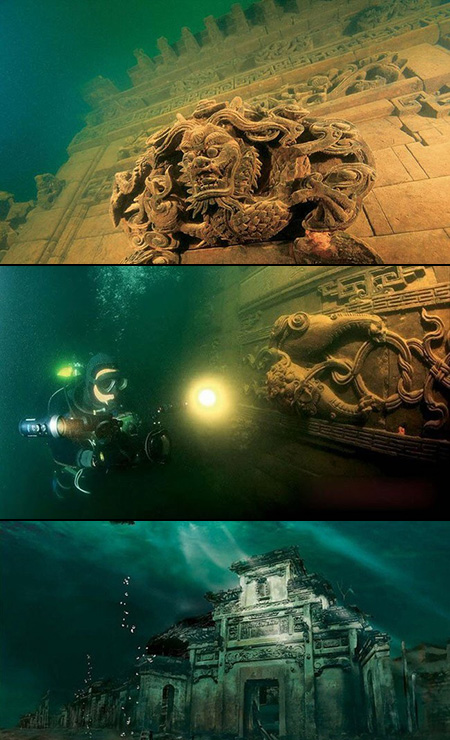 Believe it or not, the Chinese government intentionally sank “Lion City” in the 1950s to create a dam. The original Shi Cheng city however, was built during the Eastern Han Dynasty and is as big as 62 football fields. More recently, in 2001, the city was rediscovered, along with its 265 arches.

Lost for over 1600-years, the royal quarters of Cleopatra were discovered off the shores of Alexandria in 1998. The site was submerged by earthquakes and tidal waves, astonishingly, several artifacts remained intact. Cleopatra was a member of the Ptolemaic dynasty, a family of Greek origin that ruled Egypt after Alexander the Great’s death during the Hellenistic period. The Ptolemies, throughout their dynasty, spoke Greek and refused to speak Egyptian, which is the reason that Greek as well as Egyptian languages were used on official court documents such as the Rosetta Stone. By contrast, Cleopatra did learn to speak Egyptian and represented herself as the reincarnation of an Egyptian goddess, Isis.

SOUL Volt Pro Wireless Headphones Get 73% Reduction to $39.77 Shipped, This Weekend Only

32 Bizarre Gadgets and Inventions from the Past