The Orion Nebula is essentially a diffuse nebula situated south of Orion’s Belt in the constellation of Orion. It is one of the brightest nebulae, and is visible to the naked eye in the night sky. It’s the closest region of massive star formation to Earth. The nebula is estimated to be 24 light years across. It has a mass of about 2000 times the mass of the Sun. Continue reading for more. 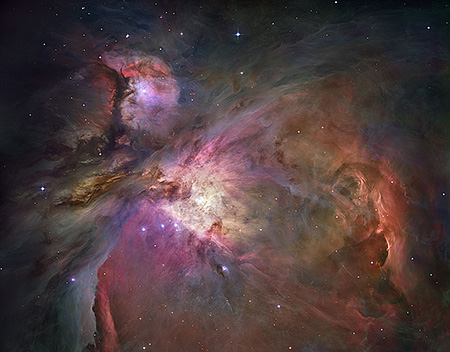 The Orion Nebula offers one of the best opportunities to study how stars are born partly because it is the nearest large star-forming region, but also because the nebula’s energetic stars have blown away obscuring gas and dust clouds that would otherwise block our view – providing an intimate look at a range of ongoing stages of starbirth and evolution. This detailed image of the Orion Nebula is the sharpest ever, constructed using data from the Hubble Space Telescope’s Advanced Camera for Surveys and the European Southern Observatory’s La Silla 2.2 meter telescope. The mosaic contains a billion pixels at full resolution and reveals about 3,000 stars. 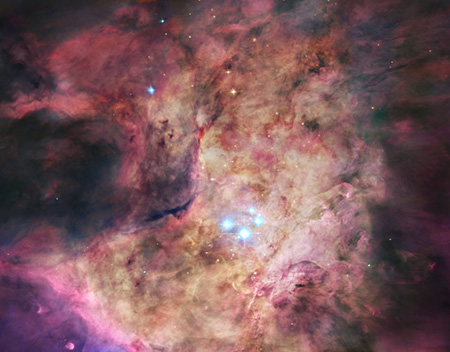 Near the center of this sharp cosmic portrait, at the heart of the Orion Nebula, are four hot, massive stars known as the Trapezium. Gathered within a region about 1.5 light-years in radius, they dominate the core of the dense Orion Nebula Star Cluster. Ultraviolet ionizing radiation from the Trapezium stars, mostly from the brightest star Theta-1 Orionis C powers the complex star forming region’s entire visible glow. About three million years old, the Orion Nebula Cluster was even more compact in its younger years and a recent dynamical study indicates that runaway stellar collisions at an earlier age may have formed a black hole with more than 100 times the mass of the Sun. 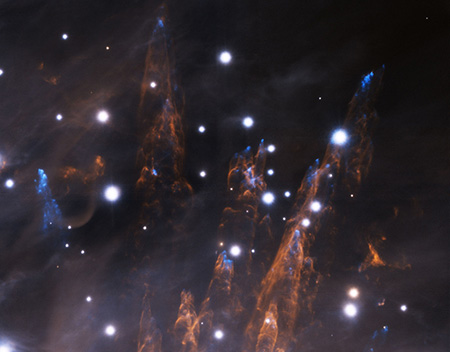 Cosmic bullets pierce the outskirts of the Orion Nebula some 1500 light-years distant in this sharp infrared close-up. Blasted out by energetic massive star formation the bullets, relatively dense, hot gas clouds about ten times the size of Pluto’s orbit, are blue in the false color image. Glowing with the light of ionized iron atoms they travel at speeds of hundreds of kilometers per second, their passage traced by yellowish trails of the nebula’s shock-heated hydrogen gas. The cone-shaped wakes are up to a fifth of a light-year long. The detailed image was created using the 8.1 meter Gemini South telescope in Chile with a newly commisioned adaptive optics system (GeMS).

2. Dust of the Orion Nebula 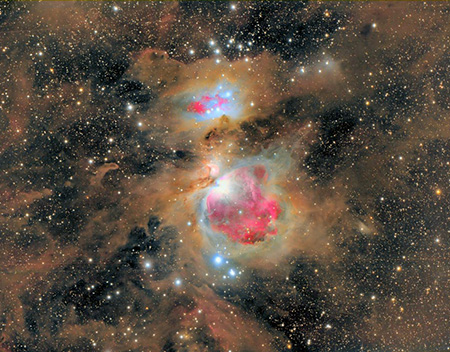 What surrounds a hotbed of star formation? In the case of the Orion Nebula — dust. The entire Orion field, located about 1600 light years away, is inundated with intricate and picturesque filaments of dust. Opaque to visible light, dust is created in the outer atmosphere of massive cool stars and expelled by a strong outer wind of particles. The Trapezium and other forming star clusters are embedded in the nebula. The intricate filaments of dust surrounding M42 and M43 appear brown in the above image, while central glowing gas is highlighted in red. Over the next few million years much of Orion’s dust will be slowly destroyed by the very stars now being formed, or dispersed into the Galaxy. 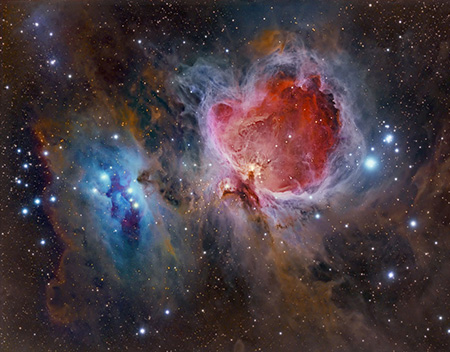 The Great Nebula in Orion, also known as M42, is one of the most famous nebulas in the sky. The star forming region’s glowing gas clouds and hot young stars are on the right in this sharp and colorful image that includes the smaller nebula M43 near center and dusty, bluish reflection nebulae NGC 1977 and friends on the left. Located at the edge of an otherwise invisible giant molecular cloud complex, these eye-catching nebulae represent only a small fraction of this galactic neighborhood’s wealth of interstellar material. Within the well-studied stellar nursery, astronomers have also identified what appear to be numerous infant planetary systems. The gorgeous skyscape spans nearly two degrees or about 45 light-years at the Orion Nebula’s estimated distance of 1,500 light-years.