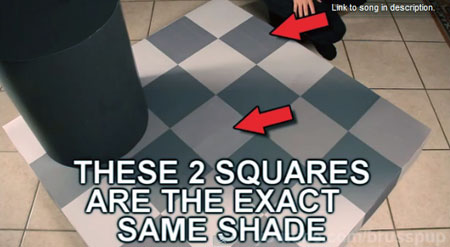 Optical illusions are designed to fool the human eye, but sometimes, they just don’t seem possible. Well, thanks to a few helpful geeks, we get an inside look at how five mind-blowing illusions are accomplished. Continue reading to see them all.

I’ve been getting into minecraft recently and ya, it’s addicting. I know I’ve made a few of these types of posters before but I thought you guys might enjoy a Minecraft version. I debated on whether to add music or just use the sound fx. Obviously I went with the sound fx. I didnt include any of the actual sound fx because I was a little lazy.

I was asked by Youtube to participate in their “Play Means Business” Program. They gave me the statistic of “500 years of youtube videos are watched each day through social media sites” and asked if I could build an illusion around it. I thought VHS tapes would be a nice way to portray “video” and would be easy to work with to create the illusion. The only effects added to this video are the words added to the floor below “500 years” at the end of the video.

There are 2 sets of lines moving back and forth perpendicularly but when the paper squares are placed on the screen the lines suddenly appear to be a square moving in a circular motion. I’ve seen this illusion for a while and have always been impressed by it. I wanted to try and create my own version.