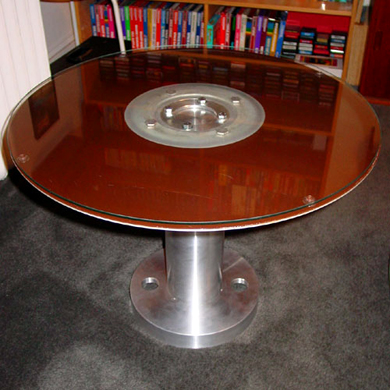 You’re old hard drive(s) is/are good for more than just collecting dust, as you’ll see in these seven examples. Highlights include the Hard Drive Table, Belt Buckle, and more. Vote for your favorites after the jump.

Who knew an old hard drive platter could be so fashionable?

Ingredients: Hard Drive platter (Jaz disk), paper clip, hacksaw, screw(s), and small sheet of basswood (for guide). Out of the recent “technology” on a belt projects, I think I like this one the most – it’s subtle but still recognizable

Have old hard drives laying around? Why not make a PC case out of them — aside from the heating issues. Here’s what the creator has to say:

While waiting for parts to arrive and new ideas to sprout up on my CLOWNED project, I’ve started another. I’m building a custom case made of Hard Drives. All of the HD’s are DEAD. Many are 2GB and below, 1 is the 120GB HD I had in Air Force One that died. My teachers were happy to unload the mounting piles of dead HD’s they had and I was happy to take ‘em. To start, see the 2 boxes worth of dead HD’s I’ve gotten.

The Hard Drive Coffee Table top is an original 26″ diameter hard drive platter from an early storage device (circa 1970). The center hub of the platter is solid aluminum. The custom-created pedestal is also solid aluminum; a cylinder measuring 5.9″ in diameter and 18.5″ in length. It has a machined top and bottom to fit into the hard drive hub and base, respectively

All you need is an NES cartridge, a laptop hard drive, and a USB/drive converter to make the “Zelda Drive 1.0”. Here’s how to make one yourself:

The first thing that you need to do, is get a NES cartridge. If you dont have one, used video game stores usually still have a few. I had two copies of Zelda, so I chose to use that one. Next, you need a laptop drive of some sort. I started this with an OLD ~1000 RPM laptop drive. I swear I could piss bits faster than this thing could read/write. BUT it worked. And then you need to get a hold of a USB/drive converter appropriate to the drive you are using. I got mine from geeks.com. It came with this steel black enclosure that my old drive didnt even fit in, which is why I did this

File this under: “Creative Hard Drive Projects” Have a spare hard drive laying around? Why not turn it into a nifty motorcycle, like this person.[Source]

HDDs have only tiny stepper motors, so this thing doesn’t have much torque. Nevertheless it runs fast enought to slit fingertips open and cause nasty cuts