In the future, robots may replace your cat, ones that can “playback audio, photo and video content from multiple sources such as PCs, Internet or other storage devices.”

The Philips iCat robot “interacts with the user in a natural way by understanding spoken requests, giving replies, recognizing faces or everyday objects and by using body language such as facial expressions, nodding and other head movements.”

iCat can playback audio, photo and video content from multiple sources such as PCs, Internet or other storage devices. Its intelligence is made possible by an advanced software architecture

This realistic cat robot made its debut at the 2006 Tokyo Toy Show and is looking to give all robotic pets a run for their money. It’s quite interesting to say the least.[Source]

Dynamizer demonstrated their robotic cat at the “Kondo KHR-1 Second Anniversary Celebration”. Strangely enough, the cat uses a bicycle headlight as its head/face.

The robot’s legs have a basic cam design that enables it to move around in a very cat-like fashion. The legs are identical for each side, and mirrored for the opposite side. The four servos that drive the legs also form the cat’s body, while another servo mounted on top of the front pair of leg servos provides up and down motion for the robot’s head 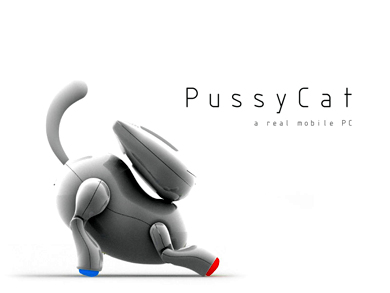 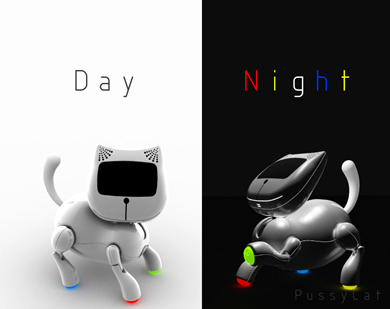 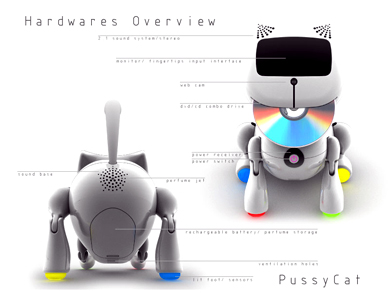 The “Pussy Cat” mobile PC “can be a good home monitor and would have fun in role play with distant friends. A self-feeding system, automatically charges the device.”

As a Personal Computer, all basic tasks: watching video, listening music, playing game, surfing internet, instant messaging, email, reminder, alarm, etc. As a Pussy Cat, an A.I. 4-legged robotic cat can move around home. It has face recognition technology that let it remember who is master