Funko Pop’s Baby Yoda won’t be released until after Christmas, but you’ll be able to snag one before they sell out in stores for just $8.78, this week only, originally $10.99. Inspired by the Disney+ live action series Star Wars: The Mandalorian, this tiny creature is a perfect addition to your POP collection. Product page. Read more for a video and additional information. 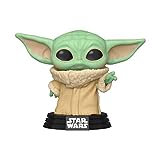 For those who don’t know, two other members of Yoda’s unnamed alien species are known, although neither is known to be part of Yoda’s family. Yaddle (a background female character in The Phantom Menace as a Jedi Master) and the character in The Mandalorian known currently as “the child” (initially called Baby Yoda by fans due to the unknown name of Yoda’s species).