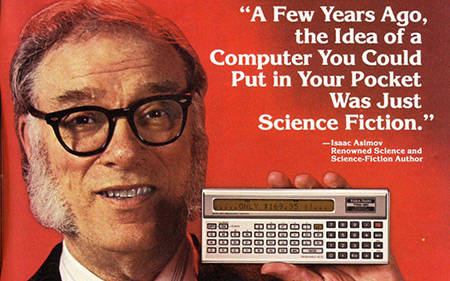 Isaac Asimov made some predictions about the world today (2014) at the 1964 World’s Fair in New York, and some of them are startling accurate to say the least. Here’s a little excerpt from the New York Times article: “Gadgetry will continue to relieve mankind of tedious jobs. Kitchen units will be devised that will prepare “automeals,” heating water and converting it to coffee; toasting bread; frying, poaching or scrambling eggs, grilling bacon, and so on. Breakfasts will be “ordered” the night before to be ready by a specified hour the next morning.” Continue reading for more.

Isaac Asimov told the New York Times in 1964: “Robots will neither be common nor very good in 2014, but they will be in existence. The I.B.M. exhibit at the present fair has no robots but it is dedicated to computers, which are shown in all their amazing complexity, notably in the task of translating Russian into English. If machines are that smart t’day, what may not be in the works 50 years hence? It will be such computers, much miniaturized, that will serve as the ‘brains” of robots.”