You’d think any plant that hasn’t been watered for even a year would be long gone, but not this garden David Latimer. His bottle garden, now almost in its 53rd year (last watered in 1972), hasn’t taken up much of his time. The bottle garden, known as a terrarium, has created its own miniature ecosystem, despite being cut off from the outside world. This is made possible because it’s still absorbing light to photosynthesize, the process by which plants convert sunlight into the energy they need to grow. Continue reading for more images and information. 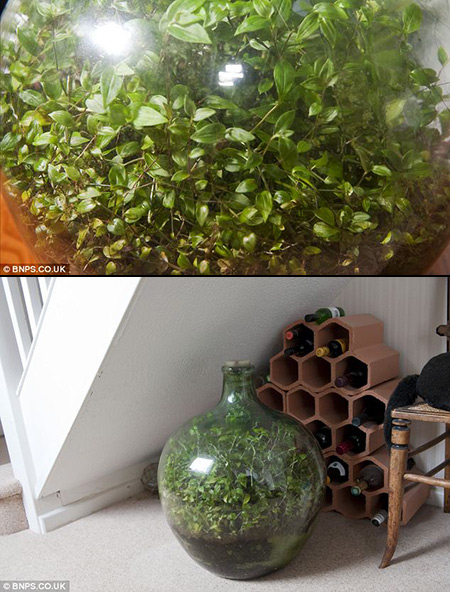 According to The Daily Mail, “Photosynthesis creates oxygen and also puts more moisture in the air. The moisture builds up inside the bottle and ‘rains’ back down on the plant. The leaves it drops rot at the bottom of the bottle, creating the carbon dioxide also needed for photosynthesis and nutrients which it absorbs through its roots. It was Easter Sunday 1960 when Mr Latimer thought it would be fun to start a bottle garden ‘out of idle curiosity’.”