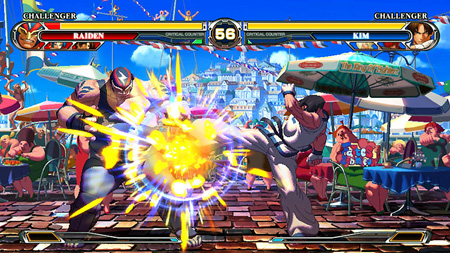 Slated for release in July on the Xbox 360 and PS3 platforms is SNK Playmore’s King of Fighters XII. Unlike its predecdessors, KOF XII “introduces the ‘critical counter’ system; when a player lands a close strong punch as a counter, the character enters into a critical counter mode where the player has a short amount of time wherein their character can link multiple attacks together.” Video after the break. Click here for first picture in gallery.

Once the critical counter’s time period has expired (signified by a green hit) the player can finish with a special move. Finally, there is also a “clash” system in place wherein characters who land blows on one another with matched timing, the engine will generate a ‘break’ effect and push the characters away from one another into a neutral standing.