Here’s a rare look at Robocop’s new suit and motorcycle on the set of director Jose Padilha’s remake, slated for release next year. In this remake, “Kinnaman plays Alex Murphy, the hero police office who is critically injured in the line of duty; his life is saved using the latest robot technologies, creating a futuristic Robocop who struggles to adjust.” Continue reading for one more picture and additional information. 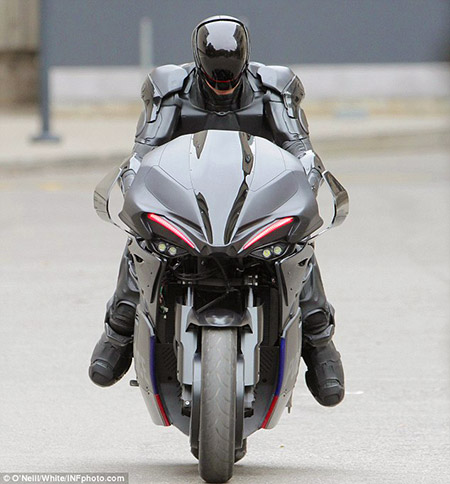 Speaking to MTV Kinnaman said: ‘The RoboCop reboot is going to be a lot more human,’ adding, ‘the original is one of my favorite movies. I love it. ‘Of course, [director Paul Verhoeven] has that very special tone, and the reboot is not going to have that tone. It’s a re-imagination of it.

In the film Michael Keaton is set to play the role of Raymond Sellars, CEO of the corporation that builds RoboCop in the MGM/Columbia Pictures’ RoboCop remake of the 1987 movie. Keaton joins previously announced Joel Kinnaman, Gary Oldman, Samuel L Jackson and Abbie Cornish in the Jose Padilha-directed film.

Innovative CD Comes with its Own Working Turntable, Lets You Become a DIY DJ

This is Not a Killer Whale, Just an Awesome Personal Submarine