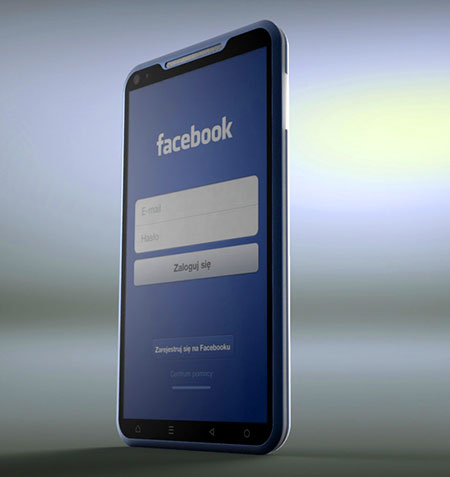 Yes, it’s coming sooner than later, the official Facebook-branded smartphone that is. This speculated phone will allegedly come with a custom-designed OS that enhances your Facebook experience, though no specifics have yet been released. Continue reading to see five cool and creative phone concepts that fans have came up with so far.

This device has a compact aluminum casing and a sliding mechanism. The wheel is all aluminum and the experience must be very nice when it comes to touching this area with your fingertips. With this wheel you can scroll through the Facebook timeline, News list, Friend List photos and even the Instagram filters. The design here is something between iPod nano and Motorola Flipout. I could imagine every teen in USA playing with such a device, to be honest. In the sliding area we’ve got what looks like a pretty decent camera, maybe a 5 megapixel sensor, while at the back there’s a cutout for a speaker.

he handset integrates Instagram with LYTRO and seems to run Android 4.0 Ice Cream Sandwich, judging by the upper and lower side of the screen. To me this looks like a full touch smartphone with a 4.5 to 4.8 inch screen, most likely a HD one, although one wouldn’t necesarilly need 720p resolution to socialize. If Facebook wants to keep the cost down, they’ll make a handset with great performance, cheap components, decent camera and great battery. So, a qHD display, 8MP camera, a dual core CPU and 4G LTE connectivity.

Other than that everything is cool, there’s even a FB button for a Home button, a metallic back, a camera with flash (8MP sensor?) and a very interesting earpiece area at the front. There’s a lot of metal involved in the design of the concept Facebook handset, compared to the usual plasticky devices seen lately, Samsung Galaxy S III included. It’s true, it may be polycarbonate in some cases, but metal is still metal. Also that blend between gray metal and black plastic at the back is pretty interesting.

he Blue Experience phone has an Instagram button and comes with a blue saturated aluminum casing (17.5 x 5.5 cm). It’s designed in as a wedge and the display is easy to view even when the handset is flat on the table. The display size and aspect ratio are optimized for the new Facebook core app OS. At the top of the Facebook Phone we have an incoming message notification area and a button that allows access to the messaging center directly. At the back there’s a camera with LED flash and Spotify is also integrated into this experience with a dedicated button on the left side.

As you probably know already, Facebook recruited many former software and hardware engineers from Apple and put them to work on the Facebook Phone. Michal’s Facebook Phone features a 4.2 inch display, possibly a Super AMOLED or SLCD 2 one, plus an 8 megapixel camera at the back. The design of the camera area with that metallic band would make any hardware maker jealous, aside from Toshiba, that already did a similar thing with the cameras on the Thrive tablet.

How Not to Remove a Motorcycle with Photoshop