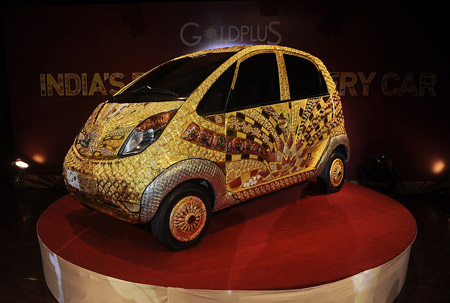 At $4.6-million, the Tata Nano Gold Plus is the most expensive of its kind. Featuring “176 pounds of 22 karat gold, 33 pounds of silver and over 10,000 precious gems and stones.” Video after the break. Click here for more pictures.

The Tata family has produced this gold and jewel encrusted Nano as a celebratory ode to their Gold Plus jewelry stores. While a $4.6 million showpiece seems a bit much, it’s not everyday your company celebrates its 5,000th anniversary.