Saturn is the sixth planet from the Sun and the second largest planet in the Solar System, after Jupiter. Saturn is a gas giant with an average radius about nine times that of Earth. While only one-eighth the average density of Earth, with its larger volume Saturn is just over 95 times more massive than Earth. Continue reading to see more. 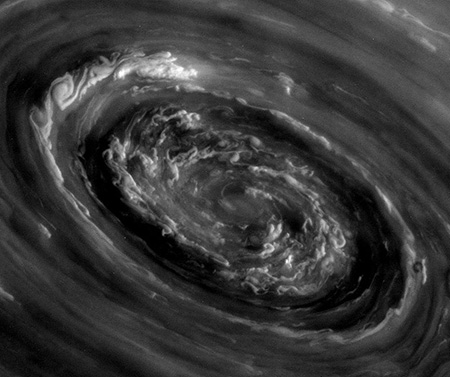 The sun rose on Saturn’s north pole just a few years ago, with Cassini taking only infrared images of the shadowed region previously. The above image is raw and unprocessed and is being prepared for release in 2013.

4. Saturn’s Rings from the Dark Side 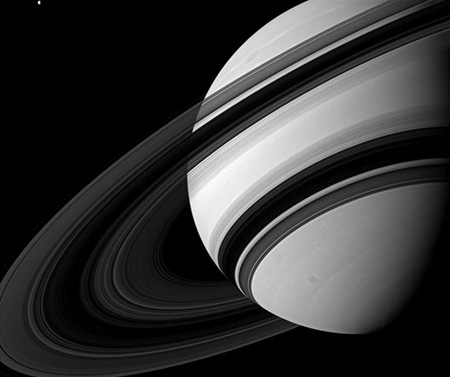 What do Saturn’s rings look like from the dark side? From Earth, we usually see Saturn’s rings from the same side of the ring plane that the Sun illuminates them — one might call this the bright side. Geometrically, in the above picture taken in August by the robot Cassini spacecraft now orbiting Saturn, the Sun is behind the camera but on the other side of the ring plane.

Such a vantage point gives a breathtaking views of the most splendid ring system in the Solar System. Strangely, the rings have similarities to a photographic negative of a front view. For example, the dark band in the middle is actually the normally bright B-ring. The ring brightness as recorded from different angles indicates ring thickness and particle density of ring particles. At the top left of the frame is Saturn’s moon Tethys, which although harder to find, contains much more mass than the entire ring system. 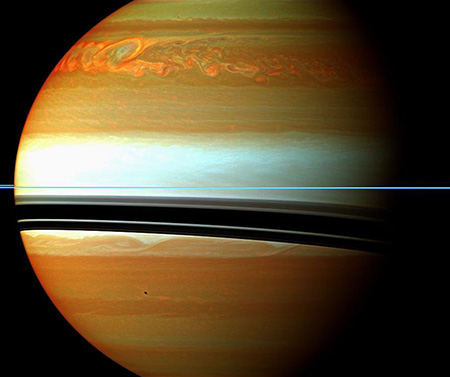 It is one of the largest and longest lived storms ever recorded in our Solar System. First seen late last year, the above cloud formation in the northern hemisphere of Saturn started larger than the Earth and soon spread completely around the planet.

The storm has been tracked not only from Earth but from up close by the robotic Cassini spacecraft currently orbiting Saturn. Pictured above in false colored infrared in February, orange colors indicate clouds deep in the atmosphere, while light colors highlight clouds higher up. The rings of Saturn are seen nearly edge-on as the thin blue horizontal line. The warped dark bands are the shadows of the rings cast onto the cloud tops by the Sun to the upper left. A source of radio noise from lightning, the intense storm may relate to seasonal changes as spring slowly emerges in the north of Saturn. 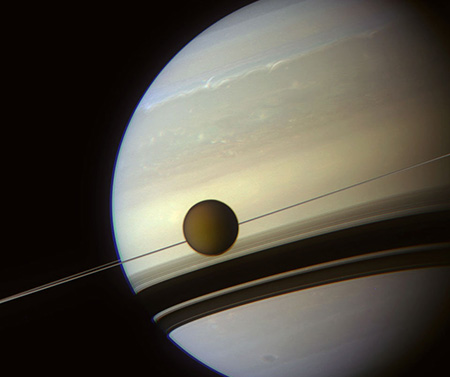 Humanity’s robot orbiting Saturn has recorded yet another amazing view. That robot, of course, is the spacecraft Cassini, while the new amazing view includes a bright moon, thin rings, oddly broken clouds, and warped shadows. Titan, Saturn’s largest moon, appears above as a featureless tan as it is continually shrouded in thick clouds. The rings of Saturn are seen as a thin line because they are so flat and imaged nearly edge on.

Details of Saturn’s rings are therefore best visible in the dark ring shadows seen across the giant planet’s cloud tops. Since the ring particles orbit in the same plane as Titan, they appear to skewer the foreground moon. In the upper hemisphere of Saturn, the clouds show many details, including dips in long bright bands indicating disturbances in a high altitude jet stream. Recent precise measurements of how much Titan flexes as it orbits Saturn hint that vast oceans of water might exist deep underground.

What would it look like to approach Saturn in a spaceship? One doesn’t have to just imagine — the Cassini spacecraft did just this in 2004, recording thousands of images along the way, and thousands more since entering orbit. Recently, some of these images have been digitally tweaked, cropped, and compiled into the above inspiring video which is part of a larger developing IMAX movie project named Outside In.

In the last sequence, Saturn looms increasingly large on approach as cloudy Titan swoops below. With Saturn whirling around in the background, Cassini is next depicted flying over Mimas, with large Herschel Crater clearly visible. Saturn’s majestic rings then take over the show as Cassini crosses Saturn’s thin ring plane. Dark shadows of the ring appear on Saturn itself. Finally, the enigmatic ice-geyser moon Enceladus appears in the distance and then is approached just as the video clip ends.

You Know You’re a Star Wars Fanatic, When You Have These Two Things