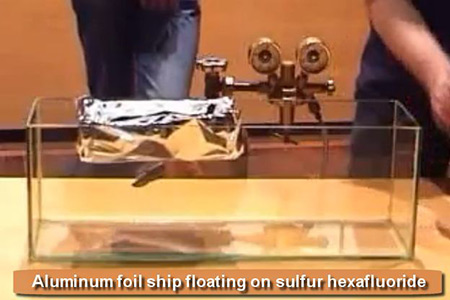 Scientifically speaking, sulfur hexafluoride (SF6) is an inorganic, colorless, odorless, and non-flammable greenhouse gas. It’s generally transported as a liquefied compressed gas and has a density of 6.12 g/L at sea level conditions, which is considerably higher than the density of air (1.225 g/L). Continue reading for more.

Of the 8,000 tons of SF6 produced per year, most (6,000 tons) is used as a gaseous dielectric medium in the electrical industry, an inert gas for the casting of magnesium, and as an inert filling for insulated glazing windows.

Sulfur hexafluoride is also used as a reagent for creating thrust in a closed Rankine-cycle propulsion system, reacting with solid lithium as used in the United States Navy’s Mark 50 torpedo.

According to the Intergovernmental Panel on Climate Change, SF6 is the most potent greenhouse gas that it has evaluated, with a global warming potential of 23,900 times that of CO2 when compared over a 100-year period.

As with all gases, the density of SF6 affects the resonance frequencies of the vocal tract, thus changing drastically the vocal sound qualities, or timbre, of those who inhale it. On the other hand, it does not affect the vibrations of the vocal folds.

1. Boat Floating On Nothing

The density of sulfur hexafluoride is relatively high at room temperature and pressure due to the gas’s large molar mass. Unlike helium, SF6 has a molar mass of about 146 g/mol, and the velocity of sound through the gas is 0.44 times the speed of sound in air due to the large inertia of a SF6 molecule.