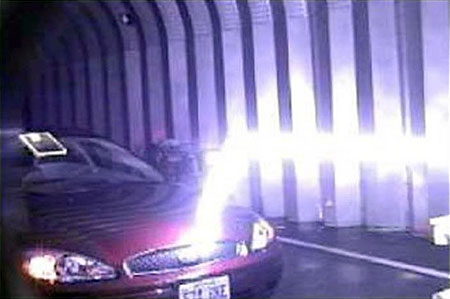 According to George Fischer, lead scientist on the project at the U.S. Army’s Armament Research, Picatinny, a real-life lightning gun “mimics the way that lightning leaps from thunderclouds to strike the ground – the electricity follows the path of least resistance.” Continue reading for a concept video and more information.

“If a laser puts out a pulse with modest energy, but the time is incredibly tiny, the power can be huge,” Fischer continued. “During the duration of the laser pulse, it can be putting out more power than a large city needs, but the pulse only lasts for two-trillionths of a second.” Why is this important?

“For very powerful and high intensity laser pulses, the air can act like a lens, keeping the light in a small-diameter filament,” said Fischer. “We use an ultra-short-pulse laser of modest energy to make a laser beam so intense that it focuses on itself in air and stays focused in a filament.”