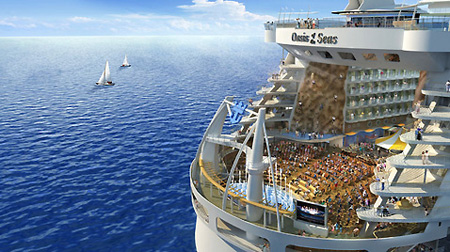 Royal Caribbean’s “Project Genesis” is set to be the world’s biggest cruise ship, measuring “1,180 feet long and weighing 220,000 tons.” Slated for launch in 2009. Click here for first picture in gallery.

The ship is so large that it has a “Central Park” the size of a football field in the middle, its own gigantic amphitheater, and seven different “neighborhoods” that people will stay on.

Feature: Jet Aircraft Small Enough to Fit in a Garage