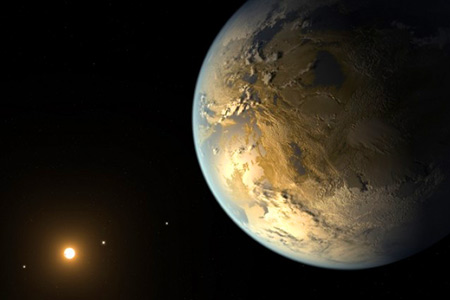 NASA’s Kepler Space Telescope has been hunting exoplanets since its launch in 2009, with its ultimate goal being to find a planet that is essentially like ours in terms of size, composition, and habitability: an Earth-twin if you will. Today, Kepler has confirmed the discovery of an Earth-sized exoplanet in its star’s habitable zone. Called Kepler-186f, it’s about 10% larger than Earth and orbits an M dwarf star – half the size and mass of our sun – around 500 light-years away in the constellation Cygnus. It takes Kepler-186f approximately 130 Earth days to complete a revolution and on the outer edge of the star’s habitable zone, the planet receives about a third of the radiation from its parent star as we do from ours. Continue reading for a video and more information.

“We know of just one planet where life exists — Earth. When we search for life outside our solar system we focus on finding planets with characteristics that mimic that of Earth,” said Elisa Quintana, lead author of the paper. “Finding a habitable zone planet comparable to Earth in size is a major step forward.”

7 Bizarre Unsolved Mysteries That Will Leave You Puzzled