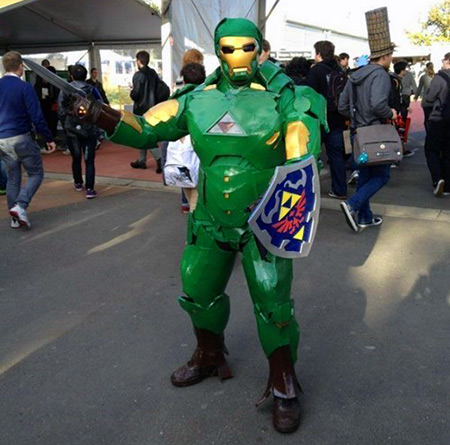 For those unfamiliar with the term cosplay – short for “costume play”, it basically refers to a performance art in which participants wear costumes and accessories to represent a specific character or idea. The term was coined by Nobuyuki Takahashi of the Japanese studio Studio Hard while attending the 1983 World Science Fiction Convention (Worldcon) in Los Angeles. Continue reading for more geeky cosplayers who are thinking outside the box.

Cosplay costumes vary greatly and can range from simple themed clothing to highly detailed costumes. Cosplay is generally considered different from Halloween and Mardi Gras costume wear, as the intention is to accurately replicate a specific character, rather than to reflect the culture and symbolism of a holiday event. As such, when in costume, cosplayers will often seek to adopt the affect, mannerisms and body language of the characters they portray (with “out of character” breaks). The characters chosen to be cosplayed may be sourced from any movie, TV series, book, comic book, video game or music band, but the practice of cosplay is often associated with replicating anime and manga characters.

18 Epic Photobombs That Will Make You Look Twice