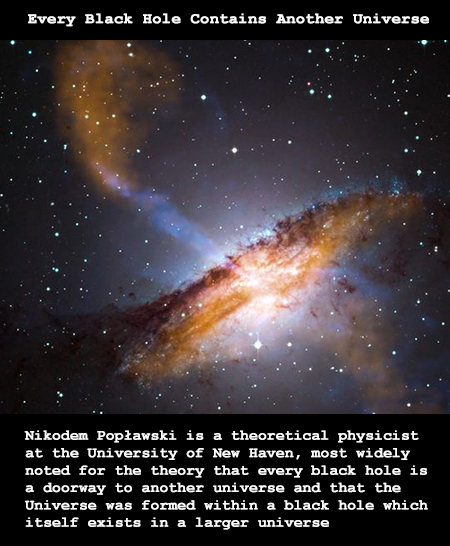 National Geographic reports that a new mind-bending theory states that black holes are actually tunnels between universes – a type of wormhole if you will. The matter that they attract doesn’t collapse into a single point, as other theories have predicted, but rather gushes out a ‘white hole’ at the other end of the black one. Continue reading for more.

Objects whose gravity fields are too strong for light to escape were first considered in the 18th century by John Michell and Pierre-Simon Laplace. The first modern solution of general relativity that would characterize a black hole was found by Karl Schwarzschild in 1916, although its interpretation as a region of space from which nothing can escape was first published by David Finkelstein in 1958. Long considered a mathematical curiosity, it was during the 1960s that theoretical work showed black holes were a generic prediction of general relativity. The discovery of neutron stars sparked interest in gravitationally collapsed compact objects as a possible astrophysical reality.

18 Funny Pictures That Show Why Cats Really Are Liquids