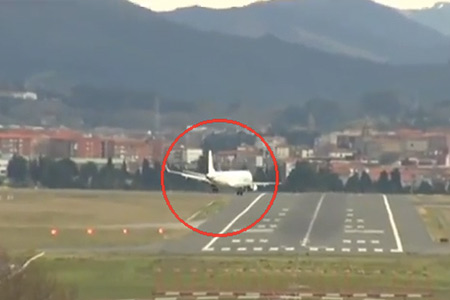 In aviation, a crosswind landing refers to a landing maneuver in which a significant component of the prevailing wind is from crosswind, wind perpendicular to the runway center line. What you’re looking at above just might be one of the craziest crosswind landings yet. Continue reading for more.

How about a C-17 Globemaster III landing at the wrong airport? Headed for Mac Dill AFB inbound from Italy it mistakenly touched down at Peter O. Knight airport in Tampa, just a few miles from Mac Dill (same runway heading and all.) The takeoff video is as impressive as the landing video. Peter O. Knight has a runway length of 3580 ft, and the C-17 needs a minimum of 3,500 ft to land.

Carriers have evolved since their inception in the early twentieth century from wooden vessels used to deploy balloons to nuclear-powered warships that carry dozens of aircraft, including fighter jets and helicopters.

The following guidelines are advised by Boeing for a crosswind landing. These guidelines assume steady wind (no gusting). These winds are measured at 10 m (33 feet) tower height for a runway 45 m (148 feet) in width. Basically, there are 3 landing techniques which may be used to correct for cross winds: de-crab, crab, and sideslip.

In situations where a crosswind is present, the aircraft will drift laterally as it approaches the runway. This drift poses significant safety issues because safe operation of the undercarriage requires the body and track of the aircraft to be aligned with the runway at touch down. If the crosswind landing is not executed safely, the aircraft may experience wingstrike, where a wing hits the runway.

In aircraft, an ejection seat is a system designed to rescue the pilot or other crew of an aircraft (usually military) in an emergency. In most designs, the seat is propelled out of the aircraft by an explosive charge or rocket motor, carrying the pilot with it.

Malfunctions or human errors (or a combination of these) related to retractable landing gear have been the cause of numerous accidents and incidents throughout aviation history. Distraction and preoccupation during the landing sequence played a prominent role in the approximately 100 gear-up landing incidents that occurred each year in the United States between 1998 and 2003.