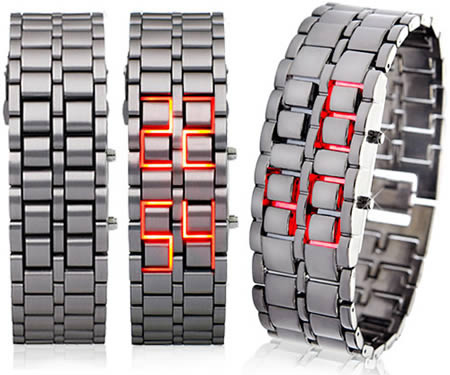 Iron Samurai (above) isn’t the name of a video game character, but rather a real watch you can actually buy. The LED-lit numbers are concealed within the metal band itself and appear at the push of a button. Continue reading to see seven more cool and crazy watches that actually exist.

Watches evolved in the 17th century from spring powered clocks, which appeared in the 15th century. The first watches were strictly mechanical. As technology progressed, the mechanisms used to measure time have, in some cases, been replaced by use of quartz vibrations or electronic pulses. The first digital electronic watch was developed in 1970.

Before wristwatches became popular in the 1920s, most watches were pocket watches, which often had covers and were carried in a pocket and attached to a watch chain or watch fob. In the early 1900s, the wristwatch, originally called a Wristlet, was reserved for women and considered more of a passing fad than a serious timepiece. Men, who carried pocket watches, were quoted as saying they would “sooner wear a skirt as wear a wristwatch”.

The Stunning Aqua Lagoons in This Desert Aren’t Optical Illusions