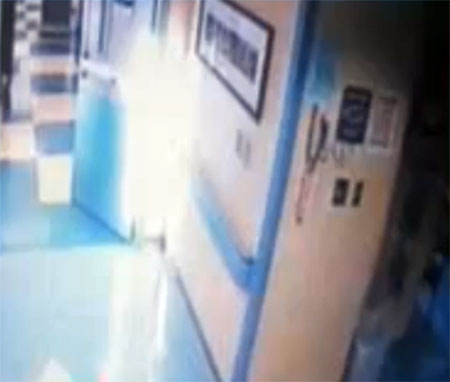 The last thing you’d expect from a person on life support is a miraculous recovery, where no medical explanation will suffice. That is exactly what happened at the pediatric ICU at Presbyterian Hospital in Charlotte, North Carolina. Continue reading for the news report and more information.

Here’s the official story: “We had a patient who has really grown up in and out of the hospital. All the staff knows her and her family. She had been in the Pediatric Intensive Care Unit (PICU) for about a month, and had been incubated – on life support. She was not doing well. The doctors had approached mom about taking her off life support the Saturday before. Mom was okay with it, and said that she’d been through so much and if was her time to go she wanted to honor that. So they had taken her off.

It was Wednesday and she was still alive. Amazing. The doctors approached mom about taking off her oxygen mask. Mom was supportive, and began praying over her daughter. The mother of another young patient who was in the bed next to her began praying with her. The nurse practitioner went to the nurses’ station to chart that she had taken off the oxygen mask. While doing so, she looked up at the security monitor that videotapes the double doors leading into the PICU. It records anyone who may be waiting outside the doors to get in since it is a secure unit. She saw a man standing there, and it looked a little funny to her, so she decided to walk down the hall to open the double doors personally. When she opened them, no one was standing there.

She walked back down to the nurses station to finish charting, assuming he had walked away, but saw him still standing there on the monitor. So she opened the doors with a button near the nurses’ station and leaned over to see him walk in, but no one was standing there. She pulled over another nurse and both stood staring at this man on the monitor and opening the doors to find no one there. The nurse practitioner leaned in closely to look at the man on the monitor and said, ‘Oh my gosh. That’s an angel. You can see his wings!’ They said that the sun starting shining so brightly and the whole PICU was strangely filled with light. They said he was a tall man and you could see wings behind him.

They pulled over all the staff of the PICU and the two praying mothers and everyone was staring at this man on the monitor and opening the doors to find no one there. Crying, everyone pulled out their camera phones to take pictures, but no one could get it to show up on their camera. The mother of the girl pulled out her camera phone and finally got a picture of the angel who was guarding the doors to the PICU. He turned out as a man of light. I have attached the picture from her phone. The girl was later discharged from the hospital to go home. A Miracle.”

Star Wars Jacket Ever Turns You Into Chewbacca, Might Be Coolest Yet