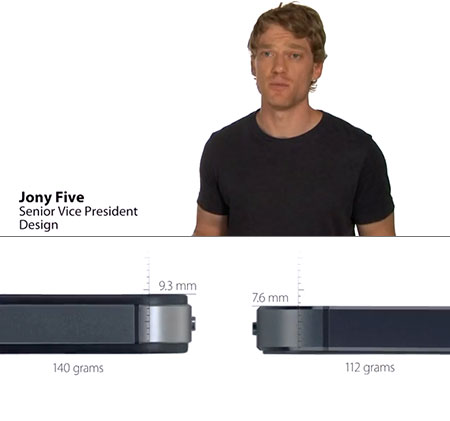 This is the iPhone 5 promo video that Apple doesn’t want you to see, mainly because it’s a spoof by comedian John Elerick and friends. In a nutshell, Apple actually designed the iPhone 9 and worked backwards to create the iPhone 5 design, or so they’d like us to think. Continue reading for the video.

JP Morgan’s chief economist, Michael Ferol claims that “sales of iPhone 5 could boost annualized US GDP growth by $3.2 billion, or $12.8 billion at an annual rate.” Techcrunch reported that the iPhone 5 sold out 20 times faster than the iPhone 4 and the iPhone 4S. Apple themselves released a statement stating that they were “blown away by the customer response”.

In a press release on September 17, 2012, AT&T announced that the iPhone 5 is the fastest-selling iPhone the company has ever offered. AT&T received more orders for the iPhone 5 than any previous models both on its first day of preorders and over the weekend.[32] Phil Schiller, vice-president of sales also released a statement, stating that Apple sold over two million units of the iPhone 5 in the first 24 hours that pre-orders were made possible.