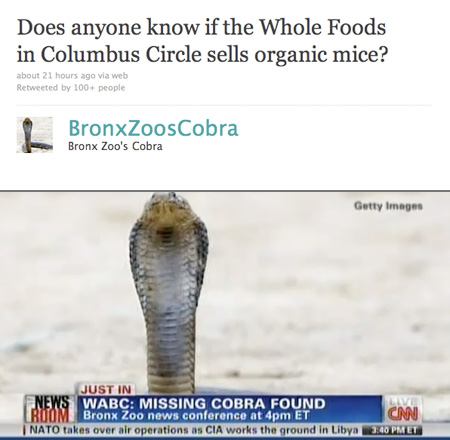 The internet — especially Twitter — has been buzzing these past two-days about a highly poisonous Egyptian cobra that escaped from the Bronx Zoo. Good news, it has just been captured and “was found ‘coiled, sort of secluded in a dark corner’ about 9 a.m. a couple hundred feet away from the enclosure she had slipped out of, said Bronx Zoo Director Jim Breheny.” Video after the break.

The poisonous cobra disappeared from the zoo last Saturday and immediately became New York’s newest and skinniest celebrity. The cobra had built up a huge Twitter following since its disappearance, but remained silent today about its capture.