Who wouldn’t want an exercise bike they could use at the comfort of their computer desk, or an automatic magazine/book page turner? We do, which makes us both strange and lazy. Vote for your favorites after the jump.

For those who spend most of their time at the computer, check out the “Geek-a-Cycle”. This innovative device combines “the functionality of a regular desk with the exercise-giving goodness of a stationary bike.” Available now for $350.

Just sit there, typing away at your spreadsheets or whatever it is you do, and all the while bike the equivalent of the Tour de France. Just make sure you keep a towel and some Old Spice handy, as no one wants to work with someone who smells like a locker room

The Book Time 5000 is yet another strange Japanese invention. This device automatically turns the page of any book or magazine at the push of a button. One drawback, it costs a whopping $3000. 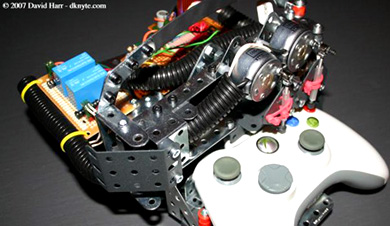 Want an easier way to increase your Gamerscore without having to put in hours of play time? Look no furthur than the xBot, an automated device that “utilizes two rotational solenoids driven by a TTL (Transistor to Transistor Logic) controller.” Video after the jump.

Instead of sitting through the 2,000 matches necessary to procure the final 60GP in Perfect Dark Zero, one gamer refashioned an Erector Set to play for him, earning points while he rediscovered the outside

This futuristic Japanese automatic door uses built-in infrared sensors identify the person or object and conform to their shape when opening.

Forget what you just watched on TV 5-minutes ago? Look no furthur than the “Wearable Gaze Detector”, which is equipped with tiny video cameras that track “your eye movements by detecting the changes in electrical potentials that happen when they move” and records what you’re looking at.

The idea is the Gaze Detector would record everything you’re looking at, so later on you could watch a movie of your day with an accompanying “attention marker” pointing out exactly what held your gaze. Paired with a Web browser, the program could automatically call up information on the objects you looked at

This beer-opening LEGO/Fishertechnik robot — built by “Ryokale” — may not be as fast as its beer-pouring counterpart, but it’s still a nifty creation none the less and gets the job done.