If you’ve got the gear, why not flaunt it? These setups range from beautiful to just flat out crazy — as in money spent. Continue reading to see them all.

Put simply, “The Wing” is one of the coolest Mac setups we’ve seen. The desk is made from a machined airplane wing and the MacBook is connected to a wall-mounted flat panel. A wireless keyboard and mouse were added as finishing touches. [Source]

For those who like to surf the web while watching TV, check out Jason’s Mac setup. It consists of a Samsung HLR5078W display, Core Duo Mac Mini, Series 2 TiVO, and Comcast HD STB.

Check out the 50″ (yes, fifty) Samsung DLP he’s got mounted on his wall, and running FrontRow from a hidden Mac mini

I mounted the monitor with a standard wall mount for LCDs and then drilled a hole for the cables and fished them down to another hole at the baseboard. The Mac mini is sitting on top of two UPS battery backup units under the desk. 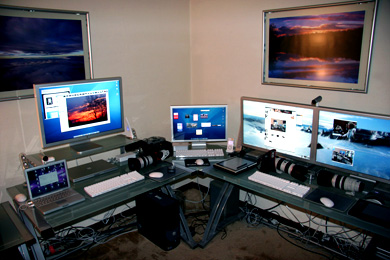