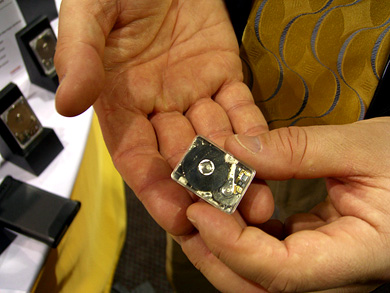 When is small too small? When you have a hard drive that’s slightly larger than a postage stamp. Vote for your favorites after the jump. 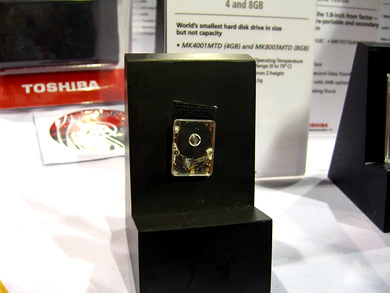 Measuing only 0.85-inches in diameter, this new hard drive from Toshiba opens up new possibilites in mobile storage. Slightly larger than a postage stamp, you could be seeing this technology in cell phones, PDAs, digital cameras, and more.

The Xun Chi 138 is claimed to be the “world’s smallest cell phone”. It features a TFT-LCD touchscreen display w/handwriting recognition, 1.3-megapixel camera, music player, and a host of multimedia functions.

…the Xun Chi 138 is scarcely larger than an AA battery and it weighs just two ounces. Too small to even dial, it requires you to use a stylus on a touchscreen and plug in a headset to talk and listen

According to one of our readers (WS), this .17 caliber mini-Browning is the world’s smallest machine gun.

Kenwood’s tiny 10GB7 is claimed to be the “world’s smallest HDD-based DAP”. It features a 1.5-inch OLED display, a 10GB HDD, 7 preset EQ modes, USB connectivity, and a picture viewer. Expect to shell out a hefty $345 for the 10GB7 when it’s released.

The Kenwood HD10GB7 measures 62×44×17mm and weighs 78 grams. It will go on sale early December in Japan and will be available in two colors Black and White. Battery life is expected to hover around 24 hours for MP3 playback while Kenwood promises better sound thanks to a proprietary technology of theirs

According to Guinness World Records, the Bede BD-5 is the “world’s smallest jet”. This single-seat aircraft made its big screen debut in the James Bond flick “Octopussy”.

It is a pusher aircraft design, with the engine installed in a compartment in the middle of the fuselage, and a propeller in the rear. Over 5,000 kits were shipped, but few were actually completed

5 Tips From a Former Sprint Employee