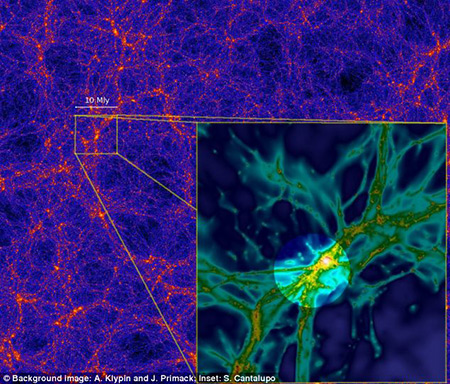 The elusive strands of dark matter hidden beneath the visible universe have been seen for the first time. It’s used to explain theories of how the universe is expanding and how galaxies interact. Now, astronomers have produced the first direct images of a part of its network using a quasar as a ‘flashlight’. The quasar you see above, located 10 billion light-years away, illuminated a vast nebula of diffuse gas to reveal the network of filaments that connect galaxies in a cosmic web. Continue reading for a video and more information.

According to The Daily Mail: “Dark matter surrounds galaxies across the universe, and is invisible because it does not reflect light. It cannot be seen directly with telescopes, but astronomers know it to be out there because of the gravitational effects it has on the matter we can see. Galaxies, for example, could not rotate the way they do and hold their shape without the presence of dark matter. The European Space Agency said: ‘Shine a torch in a completely dark room, and you will see only what the torch illuminates. That does not mean that the room around you does not exist.’

15 Ingenious and Geeky Life Hacks That Think Outside the Box