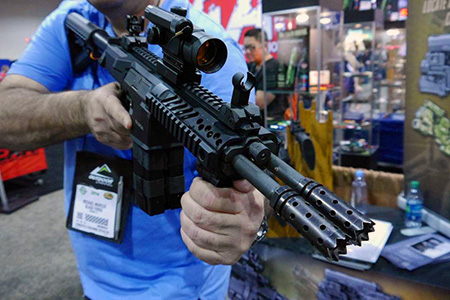 No, this isn’t a video game company trying to prank us, but rather a real double-barrel AR-15 assault rifle from Gilboa, and here are the first live images. According to The Firearm Blog: “The Gilboa Snake has two barrels that are fired simultaneously, essentially double tapping on a single trigger pull. It will be available in both semi-automatic (two rounds per trigger pull) or full auto. The rifle, with its two 9.5″ barrels, weighs 9.4 lbs.” Continue reading for another picture and more information. 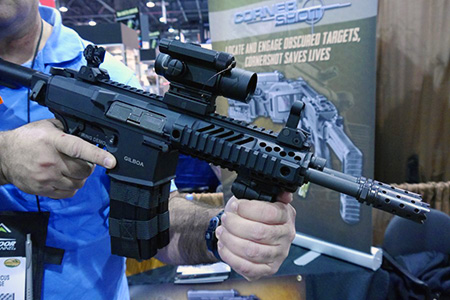 Slick Guns says: “Officially dubbed the Gilboa Snake by Israeli manufacturer Silver Shadow, it’s more of a Personal Defense Weapon (PDW)-type Short-Barreled Rifle (SBR). The Snake is most notable for its twin 9.5-inch barrels and large matching compensators with jagged standoff teeth, but it should be noted that it’s also piston-driven.”