Knightscope is a company that specializes in autonomous security robots that feature an array of technological tools to patrol and monitor properties on a 24/7 basis. To date, these robots have combined for a million hours of service to clients and the K5 recently made an appearance in the second episode of the Disney+ streaming superhero series “Loki”. They provide audio / video data reception, transmission, analysis, and can determine if emergency intervention are present. Read more for two videos and additional information.

Standing just over 5-feet-tall, the K5 is a fully autonomous robot powered by artificial intelligence systems, complete with four internal cameras capable of capturing a constant 360-degree view. Using it in a parking lot? It can scan and record license plates as well as unique digital identifiers that every cellphone broadcasts, called MAC addresses. 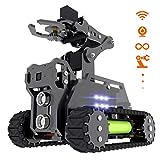