NASA researcher Dr. Harold White says interstellar travel will become possible using an Alcubierre drive, named after a Mexican theoretical physicist of the same name, that bends space-time, enabling humans to cover large distances almost instantly.This, in essence, would allow a spaceship to travel almost anywhere in a tiny fraction of the time it would take a conventional spacecraft. Continue reading for more information. 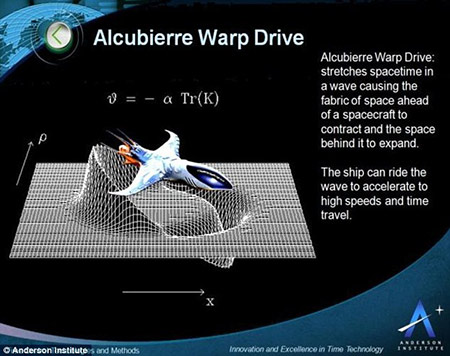 Alcubierre’s theory, first published in 1994, involved using enormous amounts of energy to expand and contract space itself, which thereby generates a ‘warp bubble’ in which a spacecraft would travel. By allowing space and time to act as the propellant, it would pull the craft through the bubble similar to stepping on an escalator. A spacecraft equipped with this type of engine would transport us to Alpha Centauri in two weeks as measured by clocks on Earth.