Astronomers have discovered a Star Wars-like planet, called PH1, that simultaneously orbits two suns, while being orbited by two others. That’s right, “if someone were able to stand on PH1, they would be able to see a double sunset as well as two extremely bright stars far off in the night sky.” Continue reading for one more picture and additional information. 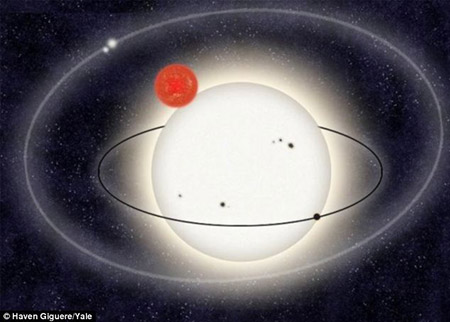 PH1’s temperature is estimated to range from a minimum of about 484 degrees Fahrenheit (251 degrees Celsius) to a maximum of 644 degrees (340 degrees C), far too hot to bear life. So far scientists have identified six circumbinary planets but none of these have further suns orbiting them.

In a draft research article the Yale rearchers noted: ‘Although PH1 is a gas giant planet, even if there is a possibility of rocky moons orbiting the body, their surfaces would be too hot for liquid water to exist.’ One of the team Meg Schwamb explains: ‘Circumbinary planets are the extremes of planet formation. ‘The discovery of these systems is forcing us to go back to the drawing board to understand how such planets can assemble and evolve in these dynamically challenging environments.’

Innovative CD Comes with its Own Working Turntable, Lets You Become a DIY DJ

This is Not a Killer Whale, Just an Awesome Personal Submarine