Photo credit: The Daily Mail
Scientists at Columbia University and Cambridge University have proposed a bizarre space elevator to the Moon that would link rockets to a solar-powered shuttle. Put simply, it would act as a long tube tethered to the Moon and would dangle near the Earth’s orbit. Called the Spaceline, astronauts would first have to fly up there using a rocket, attach to a solar-powered shuttle and then be pulled up to the Moon. Read more for a video and additional information.

There would be a docking station at the Spaceline, which enables rockets from the Earth the shuttle up astronauts, cargo as well as scientific gear. All of this could then be transported alongside the large cable to the Moon’s floor, at a fraction of the cost of sending a rocket on this identical journey. 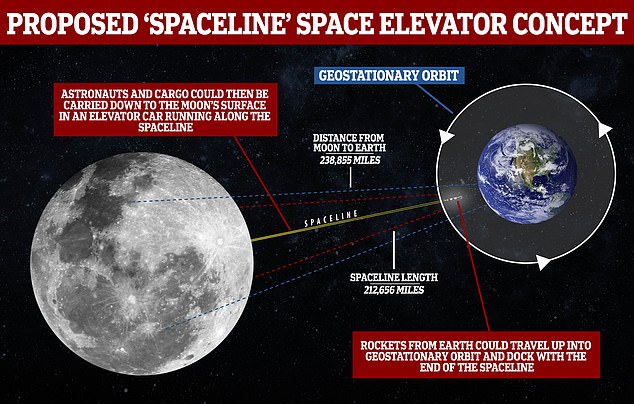 “The line becomes a piece of infrastructure, much like an early railroad. The movement of people and supplies along it are much simpler and easier than the same journey in deep space. We could (indulging in a little imagination) picture prefabricated panels being sent up the line, and assembled into an ever-growing colony,” said Zephyr Penoyre, one of the Columbia astronomy graduate students behind the Spaceline.

Japanese Samurai Uses Katana to Slice a 100MPH Baseball in Half