Finally, the first Spider-Man: No Way Home teaser trailer has been released and it contains a few surprises, or at least for some. We not only get a glimpse of Alfred Molina’s Doctor Octopus in a stinger, but one of Green Goblin’s bombs as well. The story begins after the end of Spider-Man: Far From Home, in which his identity was exposed by Mysterio, causing Peter Parker’s life to spiral out of control. Read more for the video.

Parker seeks help from Doctor Stephen Vincent Strange M.D. to try and have him patch things up by making everyone forget that he’s actually Spider-Man, but things soon take a turn for the worst. The two characters enter the multi-verse in which they encounter old and new enemies alike. There will most certainly be another theatrical trailer released before the movie hits theaters on December 17, 2021 in the United States. 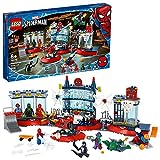 Gamer Sets New The Legend of Zelda: Ocarina of Time Speedrun Record by Finishing Game in Under 5-Minutes