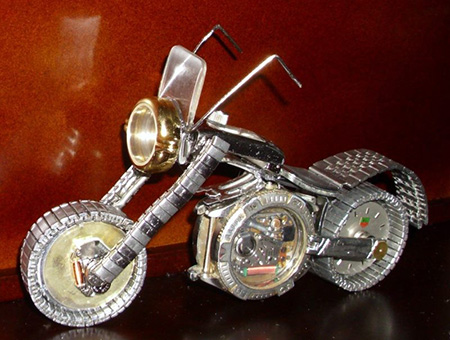 From the pictures, this looks like any old motorcycle, but upon closer inspection, you’ll see that it’s actually made entirely from old watch parts. DeviantART user “randomasusual” specializes in taking apart old watches and turning them into miniature sculptures of guitars, motorcycles, insects, and lots more. The concept of the wristwatch goes back to the production of the very earliest watches in the 16th century. Elizabeth I of England received a wristwatch from Robert Dudley in 1571, described as an arm watch. From the beginning, wrist watches were almost exclusively worn by women, while men used pocket-watches up until the early 20th century. Continue reading to see more.

Wristwatches were first worn by military men towards the end of the 19th century, when the importance of synchronizing manoeuvres during war, without potentially revealing the plan to the enemy through signalling, was increasingly recognized. The Garstin Company of London patented a ‘Watch Wristlet’ design in 1893, but they were probably producing similar designs from the 1880s. Officers in the British Army began using wristwatches during colonial military campaigns in the 1880s, such as during the Anglo-Burma War of 1885.

If Tony Stark Designed a Computer Mouse, It’d Probably Look Like This