Most wristwatches are used purely for telling time, but these cool technologies and designs aim to change that. Whether it be the Ferrowatch (above) or SATELLITE WAVE, you’ll find them here. Continue reading to see five of the coolest watch technologies. 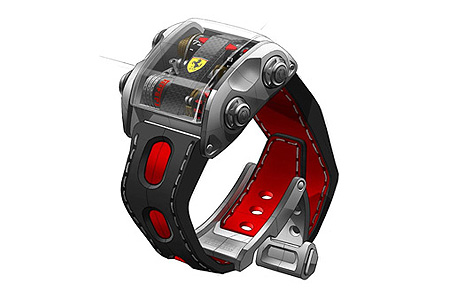 At $300000 and limited to 60-units worldwide, the Scuderia Ferrari One watch “incorporates an incredibly intricate vertical tourbillon movement, chain-driven via individually handcrafted links, with carbon fiber and other exotic materials employed in its construction.”

Priced at $15,000, the Devon Works Tread 1 is one of the first watches to offer wireless battery recharging. It’s built “around an array of four microstep motors — each driving one of an interwoven quartet of time belts.” Forget the fact that this thing is bulletproof or that its internal battery is recharged wirelessly, just look at it.

OMEGA unveils the Seamaster Planet Ocean limited edition, the world’s first watch to blend “a zirconium-based alloy called Liquidmetal with ceramics; the result is a stunning bezel which, thanks to the hardness of its materials, will retain its beauty forever.” Essentially, Omega “embeds” liquid metal into the cavities etched into their bezel rings. The metal will remain there indefinitely, never popping out and giving the bezel very high-tech touch.

Unlike other watches, the limited edition Citizen Eco-Drive SATELLITE WAVE “searches for the closest of the 24 navigation satellites that orbit the earth; it captures the day, date and time signals from space, 20,000 kilometers above the earth.” Since the satellite signals are controlled by atomic clocks, this watch’s timekeeping is ultra precise. Each of the 24 navigation satellites orbits the earth once every twelve hours, so that this watch receives the signals from any open space, even in the boundless Western Pacific or atop the world’s highest peak.

Called the Ferrowatch, this Tokyoflash creation just might be the coolest wristwatch ever. It “contains a small pool of the magnetic fluid [ferrofluid] and when held horizontally a magnetic backing creates animated gears and moving hands that indicate the time.”