Photo credit: Seaman Riley McDowell
The US Navy’s USS Gerald R Ford (CVN 78), the world’s largest aircraft carrier, recently completed the first scheduled explosive event in the Atlantic Ocean as part of the carrier’s Full Ship Shock Trials (FSST). Live explosives were used to confirm the design of new ships as well as their ability to withstand and perform in war-like conditions. It was conducted off the East Coast of the United States, within a narrow schedule that complies with environmental mitigation requirements. Read more for two videos and additional information.

The USS Gerald Ford is the latest and most advanced aircraft carrier in the U.S. Navy to date. It closed out a successful 18-month Post Delivery Test & Trials period back in April, during which the crew completed all required testing, achieved planned improvements and maintenance ahead of schedule. The valuable lessons learned will be used to increase the reliability of Ford-Class systems. 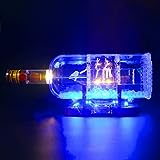 Ford’s shock trials are being conducted off the East Coast of the United States, within a narrow schedule that complies with environmental mitigation requirements, respecting known migration patterns of marine life in the test area. The Navy also has employed extensive protocols throughout FSST to ensure the safety of military and civilian personnel participating in the testing evolution,” said the US Navy.