The Milky Way is essentially the galaxy that contains our Solar System. Its name comes from its appearance as a dim “milky” glowing band arching across the night sky, in which the naked eye cannot distinguish individual stars. Continue reading to see ten fascinating things you may not have known about the Milky Way Galaxy. 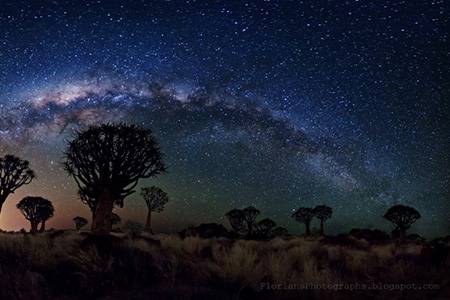 Astronomers believe the Milky Way is moving at approximately 630 km per second relative to the average velocity of galaxies taken over a large enough volume so that the expansion of the Universe dominates over local, random motions: the local co-moving frame of reference that moves with the Hubble flow. The Milky Way is moving in the general direction of the Great Attractor and other galaxy clusters, including the Shapley supercluster, behind it. The Local Group (a cluster of gravitationally bound galaxies containing, among others, the Milky Way and the Andromeda Galaxy) is part of a supercluster called the Local Supercluster, centered near the Virgo Cluster: although they are moving away from each other at 967 km/s as part of the Hubble flow, this velocity is less than would be expected given the 16.8 million pc distance due to the gravitational attraction between the Local Group and the Virgo Cluster.

9. It Passes Through 30 Constellations 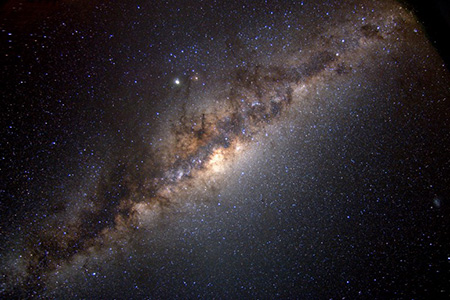 The Milky Way passes through parts of roughly 30 constellations. The center of the Galaxy lies in the direction of the constellation Sagittarius; it is here that the Milky Way is brightest. From Sagittarius, the hazy band of white light appears to pass westward to the Galactic anticenter in Auriga. The band then continues westward the rest of the way around the sky back to Sagittarius. The fact that the band divides the night sky into two roughly equal hemispheres indicates that the Solar System lies close to the Galactic plane.

8. It Has Relatively Low Surface Brightness 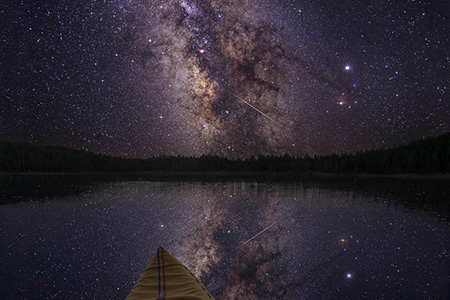 The Milky Way has a relatively low surface brightness. Its visibility can be greatly reduced by background light such as light pollution or stray light from the moon. It is readily visible when the limiting magnitude is +5.1 or better, while showing a great deal of detail at +6.1. This makes the Milky Way difficult to see from any brightly lit urban or suburban location but very prominent when viewed from a rural area when the moon is below the horizon. 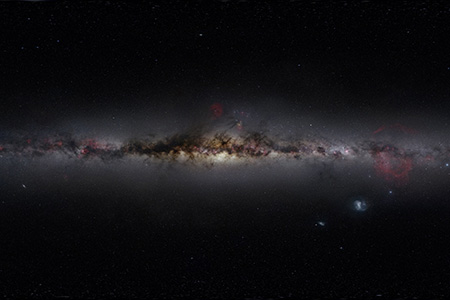 The Galaxy consists of a bar-shaped core region surrounded by a disk of gas, dust and stars. The gas, dust and stars are organized in roughly logarithmic spiral arm structures. The mass distribution within the Galaxy closely resembles the SBc Hubble classification, which is a spiral galaxy with relatively loosely wound arms. Astronomers first began to suspect that the Milky Way is a barred spiral galaxy, rather than an ordinary spiral galaxy, in the 1990s. Their suspicions were confirmed by the Spitzer Space Telescope observations in 2005 that showed the Galaxy’s central bar to be larger than previously suspected. 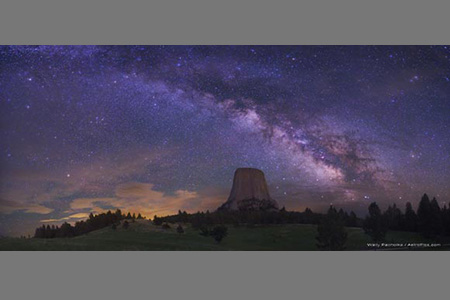 The Milky Way contains at least 100 billion stars and may have up to 400 billion stars. As a comparison, the neighboring Andromeda Galaxy contains an estimated one trillion (1012) stars.Filling the space between the stars is a disk of gas and dust called the interstellar medium. Both gravitational microlensing and planetary transit observations indicate that there may be at least as many planets bound to stars as there are stars in the Milky Way, while microlensing measurements indicate that there are more rogue planets not bound to host stars than there are stars. 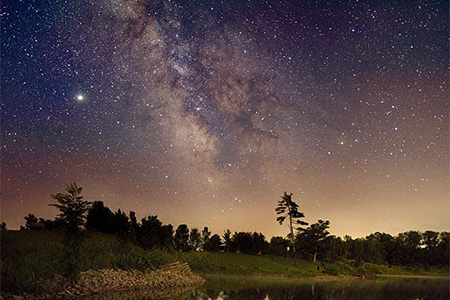 The Galactic Center is marked by an intense radio source named Sagittarius A*. The motion of material around the center indicates that Sagittarius A* harbors a massive, compact object. This concentration of mass is best explained as a supermassive black hole[nb 4] with an estimated mass of 4.1-4.5 million times the mass of the Sun. Observations indicate that there are supermassive black holes located near the center of most normal galaxies. 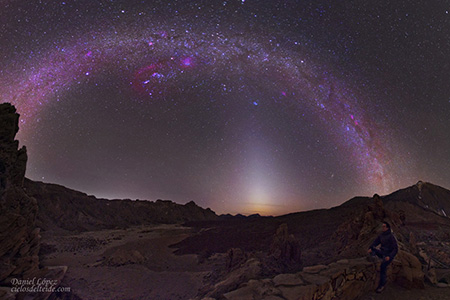 Beyond the gravitational influence of the Galactic bars, astronomers generally organize the interstellar medium and stars in the disk of the Milky Way in four spiral arms. All of these arms contain more interstellar gas and dust than the Galactic average as well as a high concentration of star formation, traced by H II regions and molecular clouds. Counts of stars in near infrared light indicate that two arms contain approximately 30% more red giant stars than would be expected in the absence of a spiral arm, while two do not contain more red giant stars than regions outside of arms.

3. Galactic Disk Surrounded By a Halo 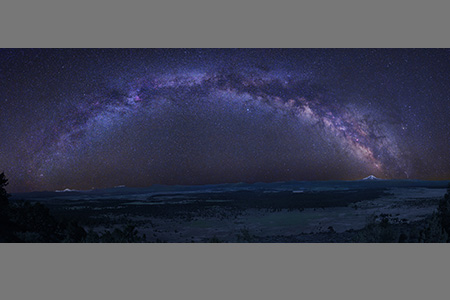 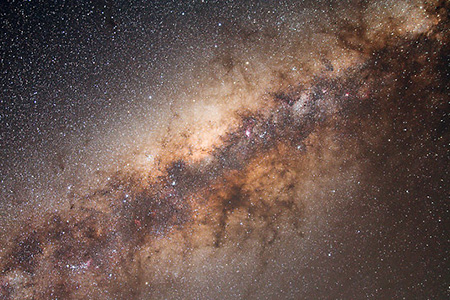 On November 9, 2010, Doug Finkbeiner of the Harvard-Smithsonian Center for Astrophysics announced that he had detected two gigantic spherical bubbles of high energy emission that are erupting to the north and the south of the Milky Way core, using data of the Fermi Gamma-ray Space Telescope. The diameter of each of the bubbles is about 25,000 light-years (7.7 kpc); they stretch up to Grus and to Virgo on the night-sky of the southern hemisphere. Their origin remains unclear, so far.

overdensities were the seeds of globular clusters in which the oldest remaining stars in what is now the Milky Way formed. These stars and clusters now comprise the stellar halo of the Galaxy. Within a few billion years of the birth of the first stars, the mass of the Milky Way was large enough so that it was spinning relatively quickly. Due to conservation of angular momentum, this led the gaseous interstellar medium to collapse from a roughly spheroidal shape to a disk. Therefore, later generations of stars formed in this spiral disk. Most younger stars, including the Sun, are observed to be in the disk.

Since the first stars began to form, the Milky Way has grown through both galaxy mergers and accretion of gas directly from the Galactic halo. The Milky Way is currently accreting material from its two nearest satellite galaxies, the Large and Small Magellanic Clouds, through the Magellanic Stream. Direct accretion of gas is observed in high velocity clouds like the Smith Cloud. However, properties of the Milky Way such as stellar mass, angular momentum, and metallicity in its outermost regions suggest it has suffered no mergers with large galaxies in the last 10 billion years. This lack of recent major mergers is unusual among similar spiral galaxies; its neighbor the Andromeda Galaxy appears to have a more typical history shaped by more recent mergers with relatively large galaxies.

What a McDonalds Happy Meal Looks Like After 979-Days