The Batmobile has been an iconic part of the Batman franchise, and there have been several custom-built vehicles that show just how creative fans / companies can get. Whether it be hydrogen or turbine powered, we’ve got the vehicles covered here. Continue reading to see them all.

Gordon Murray’s (McLaren F1) new Batmobile has been revealed, and it’s powered by hydrogen fuel along with lithium-ion batteries. On the bright side: ” it’s carbon fiber and it spits flames from a carbon-ceramic afterburner.” The carbon fiber body supposedly “breathes” and the “virtual wheels” are ringed in LEDs. How either of those features help the caped crusader fight crime is beyond us.

Built by Jay Brett, this Batman Forever Batmobile replica was built from scratch, using a tube frame chassis and GM V8 crate motor. Plus, it features of plenty of LED lighting for crime fighting during the night.

On the outside, it may look like a novelty, but the “Flatmobile” claims the title of “world’s flattest jet-powered Batmobile”. In addition to hovering 19-inches off the ground, this vehicle can travel at speeds in excess of 90mph.

Bob Dullam spent between $50k – $70k building a life-sized replica of the Batman Batmobile Tumbler “with nothing more than commonly available photos and the movies themselves, all custom welded, in his own garage by himself.” And even after repeated pleading on the Super Hero Hype forums where he’s showing it off, he ain’t sellin’. At least not until he needs to liquify some assets to work on a working Batpod, which he’s setting his sights on next.

Batman fanatic Casey Putsch has built the world’s first turbine-powered Batmobile. Another interesting feature is “an iPad in the dash which serves as the avionics system and keeps track of the important GPS coordinates.” It “was constructed in a professional racing facility alongside Grand Prix, DTM, Indy and Sports Racing cars.” 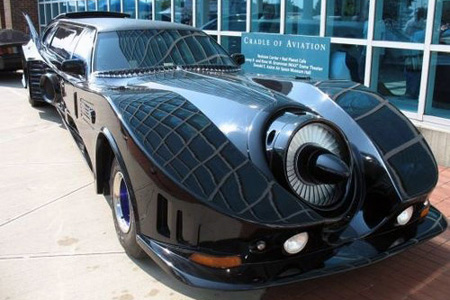 What do you get when you combine millionaire playboy Bruce Wayne with his superhero alter-ego, Batman? The stretch limo Batmobile. If Batman needs to shuttle a group of his friends around town, the Batmobile limousine would be his vehicle of choice, or so we think. Unfortunately, the dual afterburners in the back are not functional.

5 of the Funniest Kids’ Reactions to Terrible Presents

Why You Should Always ask the Girl to Call Your Phone