What you’re looking at above is the Hoag’s Bull’s Eye Galaxy, located approximately 600 million light years away. While the Milky Way is a spiral galaxy that’s roughly the same size, the outer ring on Hoag is 120,000 light years in diameter. The Bull’s Eye is comprised of a giant yellow ball of stars, surrounded by emptiness until you reach the ring of stars, but how could such a configuration of stars ever happen? According to astronomers, this is the result of two galaxies in collision – a smaller galaxy shot through the center of a larger galaxy like a canon ball, and the gravitational forces that result create a ring of density waves that in turn create star formations rippling out from the center. Continue reading for more. 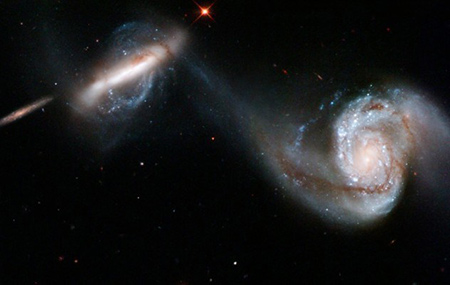 The two galaxies seen in ARP 87 almost ran into one another a few billion years ago, and thanks to gravity, the stars contained within them have been strung out as they moved apart. They’ll most likely sweep back toward one another in a series of near misses until they eventually merge into one big galaxy. Currently, they remain tethered together by a thin stream of stars, gas, and dust particles, like enormous intergalactic bolas. 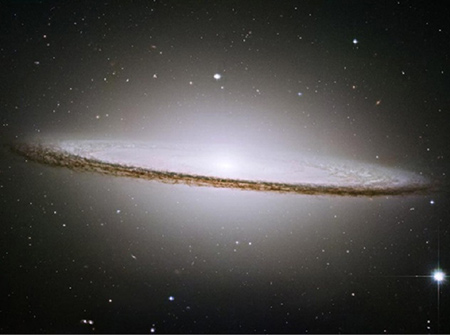 When look closer at the bulge in the Sombrero Galaxy, you’ll see that it’s actually made up of several different clusters of stars, rather than just one large one. The brim itself is quite perplexing and astronomers have not yet come up with a logical explanation for it. However, they speculate that the heart of the Sombrero Galaxy harbors a massive black hole. 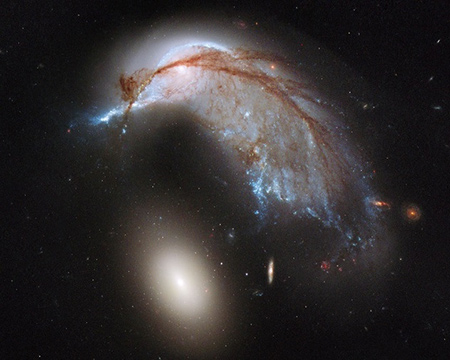 The Porpoise Galaxy, also known as NGC 2936, looks just like a dolphin and a penguin protecting an egg to others, but in reality, this is a system of two galaxies. The “dolphin” shape is actually part of NG 2936, whereas the “egg”, is called ARP 142. The former used to be a spiral galaxy, similar to our own Milky Way, but immense gravitational forces of the denser galaxy below contorted its shape significantly. The dolphin’s “eye” was previously the spiral galaxy’s core within the Hydra constellation. In about a billion years, the pair will merge into one. 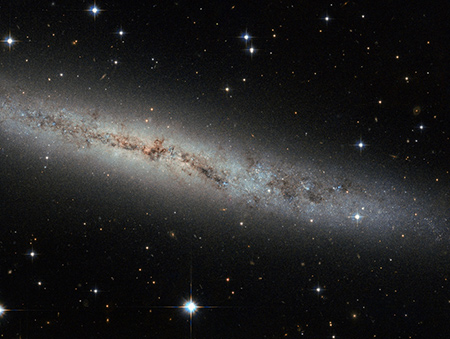 Hubble imaged spiral galaxy ESO 373-8, dubbed the Pancake Galaxy, located some 25 million light-years away, in this new image. Together with at least seven of its galactic neighbors, this galaxy is a member of the NGC 2997 group. Why are galaxies stretched out and aligned like this? Try spinning around in your chair with your legs and arms out. Slowly pull your legs and arms inwards, and tuck them in against your body. Notice anything? You should have started spinning faster. This effect is due to conservation of angular momentum, and it’s true for galaxies, too. 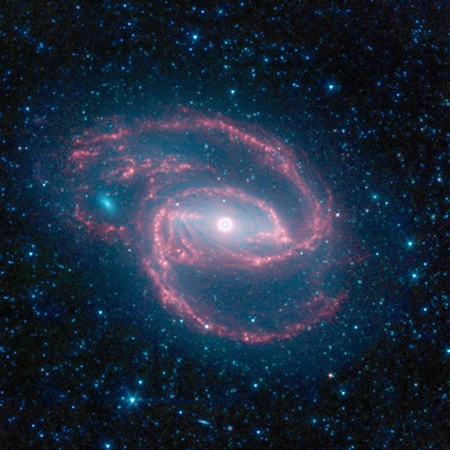 NASA’s Spitzer Space Telescope captured wild creature of the dark — a coiled galaxy with an eye-like object at its center. It’s called NGC 1097, located 50 million light-years away, and is spiral-shaped like our Milky Way, with long, spindly arms of stars. The “eye” at the center of the galaxy is actually a monstrous black hole surrounded by a ring of stars – the area around the invisible black hole is blue and the ring of stars, white. The black hole is huge, about 100 million times the mass of our sun, and is feeding off gas and dust along with the occasional unlucky star.

30 Fun and Cool Facts You Probably Never Knew About