When people think of fashion, technology doesn’t usually come to mind, but these five examples aim to change that. They include a programmable t-shirt, the HRP-4C fashion robot, and more. Continue reading to see them all.

Standing at just over 5-feet tall and 95-pounds, HRP-4C, developed by Japan’s National Institute of Advanced Industrial Science and Technology, will make its catwalk debut next week at the Tokyo fashion show. The she-bot features 30 motors spread throughout its body with an additional eight motors in its face for expressing general boredom and disgust with the help. Its main purpose is entertainment and to attract crowds much like its fleshy counterparts.

On the wearer’s left shoulder is a spinning laser that creates a visible 360 degree personal zone that other people should stay clear of. But if they dare to invade that private space, an infrared sensor located on the chest detects their presence and activates blinking LEDs, and random spinning contraptions, that reflect the wearer’s increasing anxiety the closer someone gets. 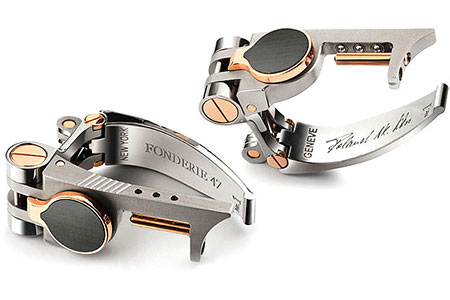 Created by Roland Iten for his new brand Fonderie 47, the cufflinks are an impressive model of engineering themselves, using Swiss watchmaking techniques so they can transform into a mens bracelets while not tethering a set of shirt sleeve cuffs. But their most unique selling point is that in addition to 18 carat white and rose gold, they’re also made from scrapped AK-47s.

Developed by a group called CuteCircuit, the tshirtOS is system designed to allow you to program a thin digital display embedded on a t-shirt via your smartphone. The shirt can display live Twitter messages, as well as photos and videos transmitted from your iPhone. According to the project’s Twitter page, the shirt is machine washable as long as you remove its battery.

The miracle product that makes this possible is called NeverWet, developed by Ross Nanotechnology to allow liquids and heavy oils to slide off machinery and electronics. Upon application, the superhydrophobic silicon-based coating creates a 160 to 175 degree contact angle, making it nearly impervious for liquids to gain a foothold. Chocolate syrup, the mortal enemy of white fabrics, basically slides off a pair of Keds without leaving a mark. And an even more dramatic video on the company’s website shows a working iPhone submerged under water for half an hour. A test that usually results in failure after just a minute.