Due to most GPS navigation units not offering real-time maps, there are many times when their directions could lead you off the beaten track and into some disastrous situations. We’ve rounded up five such stories for your viewing enjoyment. Continue reading to see them all. 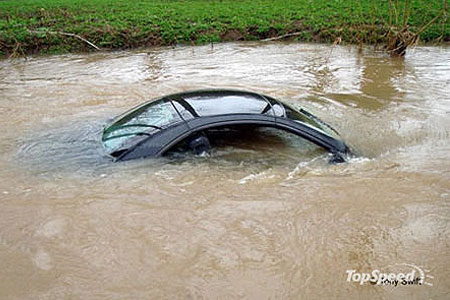 In March 2007, a 28-year-old woman following her in-car satellite navigation system ignored a number of warning signs telling her not to drive down a certain road toward a rain-swollen river, drove directly toward said rain-swollen river anyway, and drove her Mercedes SL500 right in to that rain-swollen river. Swollen with heavy rain, the raging River Sence in Leicestershire, UK, carried her car several hundred feet downstream. Luckily, the driver was rescued by someone who witnessed the accident — but it took crews a week to get the submerged Mercedes (estimated at $150,000) out of the water. 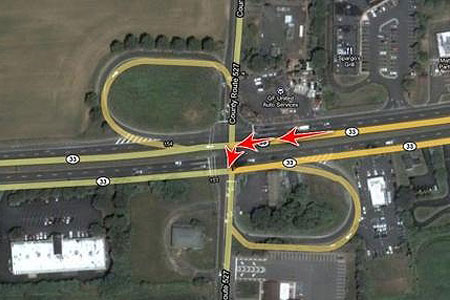 For some reason, New Jersey has a lot of “jughandles” — ramps that force drivers to first turn right before, ultimately, turning left. Consider yourself warned. Unfortunately, a 17-year-old Marlboro Township driver screwed up big time in May of 2010, when, while following his GPS, he made an illegal left turn on Route 33. That decision led to a four-car pileup (and several tickets for the teen driver, who had a provisional license). The driver’s excuse? His GPS “told him to turn left.”

It can be nerve-racking to drive a car in unfamiliar territory, but in March of 2012, a group of Tokyo students in Australia deserved every bit of that traditional tourist anxiety and embarrassment – and then some. When they ignored common sense to follow the counter-intuitive instructions on their GPS , they wound up smack in the middle of Moreton Bay. The tourists were trying to navigate between two islands along a channel route when they got stuck in the water. Fortunately, it was low tide.

In January of 2009, the California resident consulted Google Maps to find the best walking route to her destination in Park City, UT. When it directed her onto a busy four-lane highway, she confidently strode off the curb and straight into oncoming traffic. Not surprisingly, Rosenberg suffered injuries and was hospitalized. More than a year later, she filed a more than $100,000 lawsuit against Google Maps (and the driver who hit her), claiming Google’s “reckless and negligent providing of unsafe directions” caused her to suffer “severe permanent physical, emotional, and mental injuries.”

n June 2011, three women driving a rented Mercedes SUV near Seattle made the absolute wrong decision. When their trusty little robot rerouted them down a large boat launch, these Mensa candidates simply shrugged and hit the gas. They cruised all the way into the Mercer Slough, where the car became submerged in murky water. The women were okay — they all managed to get out — and Mercer Island divers were called in to recover the Mercedes. Quoth one of the rescuers on scene: “I don’t know why they wouldn’t question driving into a puddle that doesn’t seem to end…”