What you’re looking at above is an MAV, a micro air vehicle (MAV), that can be as small as 15 centimeters. Development is driven by commercial, research, government, and military purposes; with insect-sized aircraft reportedly expected in the future. The small craft allows remote observation of hazardous environments inaccessible to ground vehicles. MAVs have been built for hobby purposes, such as aerial robotics contests and aerial photography. Continue reading for more. 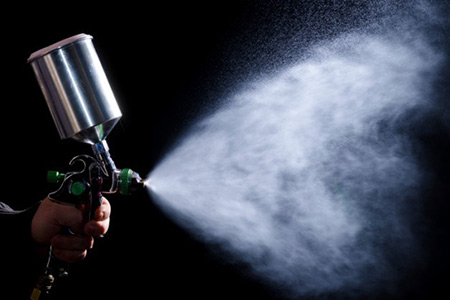 The M44 cyanide device is used for the elimination of suspected livestock predators, such as coyotes blamed for the loss of profits. It lures predators with an attractive smell, often from a small piece of bait, then uses a spring to propel a dosage of sodium cyanide into the predator’s mouth. The sodium cyanide combines with water in the mouth to produce poisonous cyanide gas.

The Welrod was a British bolt action, magazine fed, suppressed pistol devised during World War II at the Inter-Services Research Bureau (later Station IX), based near Welwyn Garden City, UK, for use by irregular forces and resistance groups. Approximately 2,800 were made. The pistol is manually operated using a rotary bolt, locking with two lugs. Loading is performed with a pull/push action using the round knurled knob to the rear of the weapon. The trigger is single stage with a simple safety at the back of the magazine housing. The detachable single stack magazine contains 6 or 8 rounds (depending on calibre) and serves as a pistol grip with the bottom part enclosed into the plastic cover.

A sleeve gun is a device wrapped around a user’s forearm and used to conceal a small firearm under a long-sleeved coat or jacket. A triggering mechanism causes the firearm to extend out of the gadget quickly enough for the user to grab it and fire. The term “sleeve gun” was also used for an experimental device developed for the British Army during World War II by Station IX of the Special Operations Executive, essentially a suppressed Welrod pistol minus the pistol grip.

You might only feel a small nudge as someone walks by you and a slight pin prick, but you’d be suffering muscle paralysis followed by suffocation very quickly and be dead within a very short period of time. This is the deadly effect of just one of the weapons found on a failed North Korean assassin last year on the busy streets of Seoul. It’s disguised to look like a Parker ballpoint pen, containing a poison needle that is practically impossible to identify as a weapon. The second pen shoots a poison-filled bullet which penetrates the skin and releases the toxin and the third weapon is a flashlight, loaded with up to three bullets. They all look completely innocuous but all three will kill.

What do you get when you combine 368, 5.0-megapixel smartphone cameras into a mosaic and then add some other classified parts? The DARPA-funded Autonomous Real-Time Ground Ubiquitous Surveillance Imaging System (or ARGUS-IS) of course. According to PetaPixel, “ARGUS-IS is a 1.8 Gigapixel drone-mounted surveillance system that took 30 months and $18.5M to become a reality. The video above is a clip from a new PBS documentary titled ‘Rise of the Drones’. It offers a fascinating peek at what the drone cam is capable of.”

20 Funny Examples of Why Some Students Are Awesome