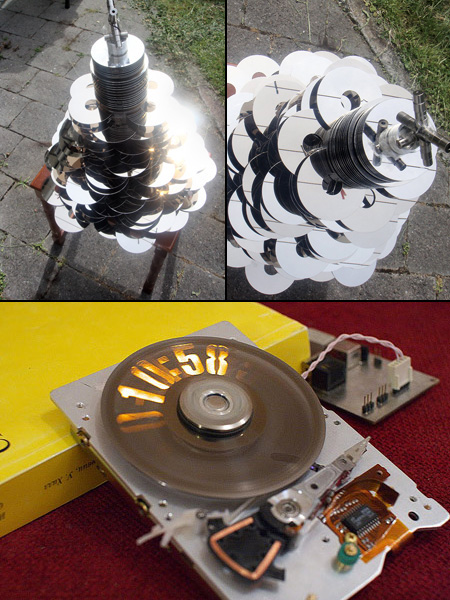 Whether it be a Christmas tree, clock, or even as an audio-playing device, there’s a hard drive hack out there that accomplishes those tasks, and quite brilliantly to say the least. We’ve rounded up five of the most creative alternative uses for old hard drives and have them all for you after the break.

Created by an NZGames forum member, this faux tree was made from a large RAID array — consisting of 60-70 hard drives — that was disassembled. The person spent approximately 3-weeks and used lots of epoxy glue, along with simple tools to build this geeky masterpiece. Best of all, individual sections are spinnable.

Called the Strobeshnik, this geeky hard drive clock essentially “relies on the stroboscopic effect to create the illusion of a persistent numeric display.” Hopefully, it gets an alarm upgrade, as this would be the perfect bedside companion for geeks.

Another day, another NES cartridge hack. This time, it’s a fully-functional NES cartridge hard drive, complete with console dock. Two caveats: the tray doesn’t lower with the cartridge and the power button needs to be wired to work with the LED.

Hard drives can be used for storage, as speakers, and even to play the Imperial March theme from Star Wars. Though many might have old broken hard drives laying around, using them to play music is most definitely an acquired skill.

Ever wanted an ultra secure hard drive (beyond passwords) that can only be accessed by you? Then look no further than the secret hidden RC hard drive by YouTube user “SAMIMYS”. In a nutshell, “this circuit makes a hidden emergency HDD to be controllable only by your key, regardless of how many people usethe same computer.

What’s Really Inside a LEGO Minifig