We have seen the future, or at least on the internet, and it’s filled with awesome technologies. Some examples include: a 4,000mph Vactrain, augmented reality gloves, 3D solar towers, and more. We’ve rounded up five of the greatest examples for your viewing enjoyment. Continue reading to see them all.

An American engineer named Darryl Oyster has developed a train that he claims can whip passengers from New York to London in under an hour. The Vactrain works just like an upsized version of those vacuum operated tubes that they use to send money and receipts around in some big stores. The cylindrical train rides in a tube that forms a close airtight seal around the cars. Suck all of the air out of the tube, and the train will be propelled forward by the pressure of air behind it.

The T(ether) system was created by MIT students David Lakatos and Matthew Blackshaw as way to collaboratively edit 3D virtual objects in mid-air, in real-time using an iPad and a motion-tracked glove. The system facilitates spacial mapping between virtual and real space, allowing a pair of editors to build, change and control virtual objects in tandem.

Now in prototype, the Burritobot is controlled via an iOS or Ruby-based smartphone app on which the user can customize his or her burrito by selecting which extrudable ingredients he or she wants and using sliders to specify the proper ratio. Then, atop a standardized tortilla, the machine goes to work, using extruders mounted on a moving carousel to deposit the desired ingredients.

All you need to do is to think about moving forwards, and the motorized deck will start to accelerate. Then when thoughts of stopping run through your mind, the deck pulls up to a stop. To make it all work, first the Emotiv helmet-like brain reading sensors pick up your thoughts, then they are processed by a Samsung tablet running Windows 8. The tablet connects to a controller for the electric motor that drives the wheels, translating your thoughts into action.

MagSurf, build by researchers at Universite Paris Diderot in France, flips the strange world of the quantum into a more sci-fi application, essentially turning a skateboard like platform into one big magnetic superconductor. Using liquid nitrogen, the team turn the platform super-cold, creating an electromagnetic field that is expelled from the inside of the board. It’s not quantum locking–the skateboard is too big to mimic that little super-cooled disc–but it provides enough outward magnetic force to float above a rail of permanent magnets. 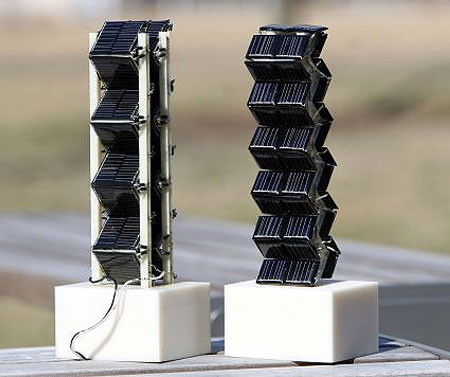 By using lots of smaller panels set at different angles on a tower, they found they can generate from 2 to 20 times as much juice as a flat panel with the same footprint. While a flat panel is usually positioned so that if faces the sun directly when it’s at peak intensity, the tower with all of its angled panels does a much better job of catching those rays when the sun is low in the sky or on cloudy days.