When is a flight simulator not just something you play on the computer? When you decide to recreate the cockpits of actual jets and planes, complete with multi-displays and instrument clusters. Continue reading to see five mind-blowing examples. 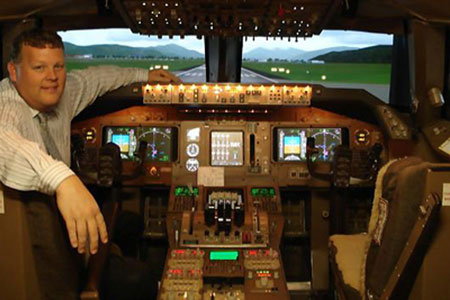 Matthew Sheil spent less than $200,000 and 10-years building an amazing Boeing 747-400 flight simulator in a warehouse. With “5 different software programs running on 14 different computers, the simulator allows Sheil to fly to and from 27,000 different airports around the world with breathtaking realism.” In Sheil’s simulator, computer screens replace the windows and if he is flying in the virtual world behind a person in Melbourne, and they are using a Qantas 767, “we actually see a Qantas 767 out the window – the software puts it in there for us – and he sees us”. 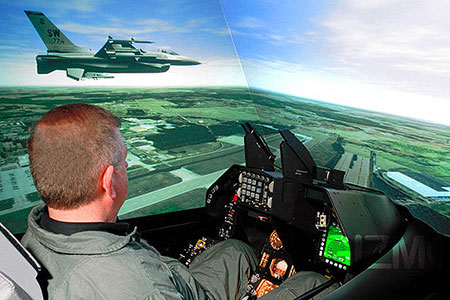 Believe it or not, this custom F-16 flight simulator is powered by 120 dual core PCs with 120 $400 graphics cards inside them, all chained together. Apparently they are used to display “10,000 entities on screen at once, realistic explosion and destruction effects and 20-40 visual acuity.”Oh, and it all comes wrapped in a 180-degree screen, along with a fully authentic replica of an F-16 cockpit.

What better way to brush up on your flying skills, than with a Flight Simulator X cockpit that utilizes a real Boeing center console along with giant screens. It offers an immersive experience to say the least. Now the only thing that could top this would be placing this cockpit inside a homemade airplane cabin, complete with flight attendants and food.

Piloting a real plane comes complete with turbulence, and the Motion FX Beta replicates that perfectly. While not officially named yet, it has “no angle limitation [and] soon will be fully-functional”, according to its creators, who reside in Brazil.

What do you do, when you want to bring the authentic Boeing 737 flying experience home? You build one of course, or at least one small portion of it. That’s exactly what Hans Krohn did. This man from Germany spent approximately 15-years and more than $20,000 to build a simulated aircraft in his own home. The hybrid plane consists of screens from a Boeing 737, a joystick that resembles controls on an Airbus plane and a housing that was built for a simulated F16 fighter plane. 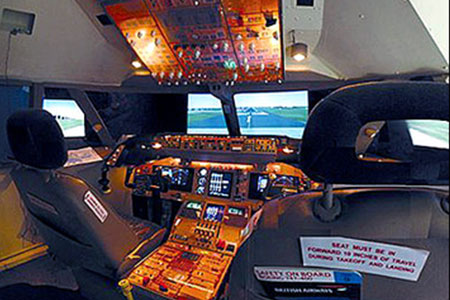 It took John Davis eight years and $30,000+ to build this amazing Boeing 747 flight simulator in a spare bedroom — powered by “Microsoft Flight Simulator for the visuals, as well as the Aerowinx PS1, which has about 30 different programs.” Yes, those are actual seats from a jet that you see, decorated with bumper stickers.