Comet Hale-Bopp was perhaps the most widely observed comet of the 20th century and one of the brightest seen for many decades. It was visible to the naked eye for a record 18 months, twice as long as the previous record holder, the Great Comet of 1811. Continue reading to see more. 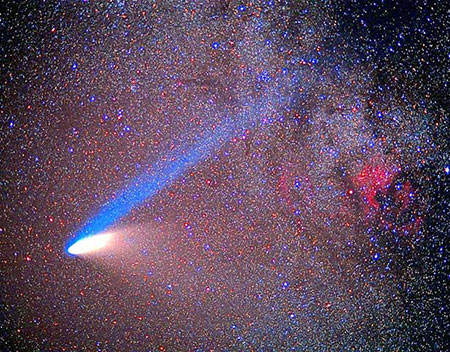 Above, Comet Hale-Bopp was photographed crossing the constellation of Cygnus, sporting spectacular yellow dust and blue ion tails. Visible on the right in red is the North America Nebula, a bright emission nebula observable from a dark location with binoculars. The North America Nebula is about 1500 light-years away, much farther than the comet, which was only about 8 light minutes away. Several bright blue stars from the open cluster M39 are visible just above the comet’s blue ion tail. 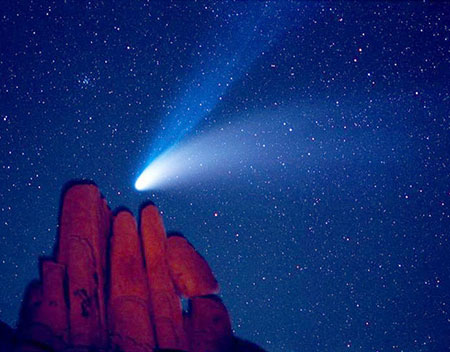 In the above photograph taken 1997 April 6, Comet Hale-Bopp was imaged from the Indian Cove Campground in the Joshua Tree National Forest in California, USA. A flashlight was used to momentarily illuminate foreground rocks during this six minute exposure. 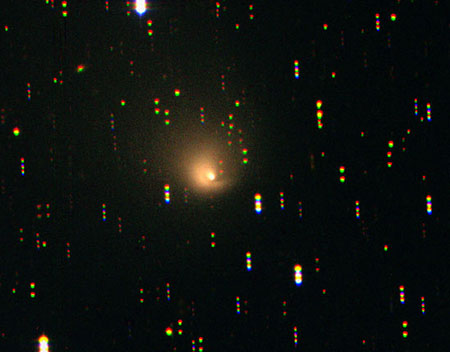 Pictured above earlier this month, Comet Hale-Bopp can be seen in the Southern Hemisphere with a moderate sized-telescope. The continued activity of Comet Hale-Bopp may be due to the large size of its nucleus – estimated to be about 50 kilometers across. The unusual dotted appearance of most stars in the above image is due to the 14 discrete exposures that were centered on the comet and not the stars.

2. Comet Hale-Bopp Over the Superstition Mountains 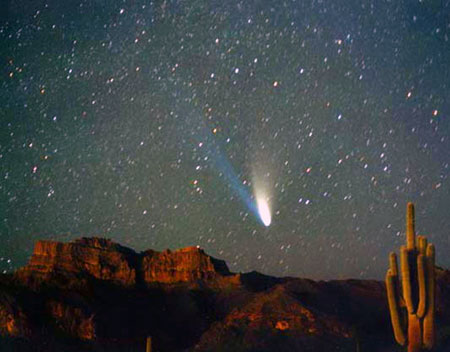 Above, Comet Hale-Bopp was photographed in 1997 behind the Superstition Mountains in Arizona. Clearly visible are the comets white dust tail that shines by reflected sunlight, and the blue ion tail that shines by glowing gas. Currently, there are several comets visible from the proper location with a small telescope. A comet visible to the unaided eye appears about once every five years. 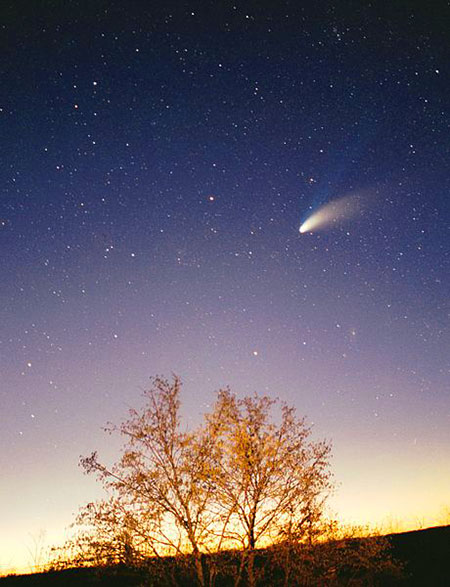 As it passed perihelion on April 1, 1997 the comet developed into a spectacular sight. It shone brighter than any star in the sky except Sirius, and its dust tail stretched 40-45 degrees across the sky. The comet was visible well before the sky got fully dark each night, and while many great comets are very close to the Sun as they pass perihelion, comet Hale-Bopp was visible all night to northern hemisphere observers.

This is a Natural Pool, Not a Fantasy World

Breathtaking Picture of Jupiter, Venus, and the Moon Above Los Angeles