A moon dog, moondog, or mock moon, is basically a relatively rare bright circular spot on a lunar halo caused by the refraction of moonlight by hexagonal-plate-shaped ice crystals in cirrus or cirrostratus clouds. Moondogs appear 22° to the left and right of the moon. Continue reading to see more.

5. A Quadruple Lunar Halo Over Spain 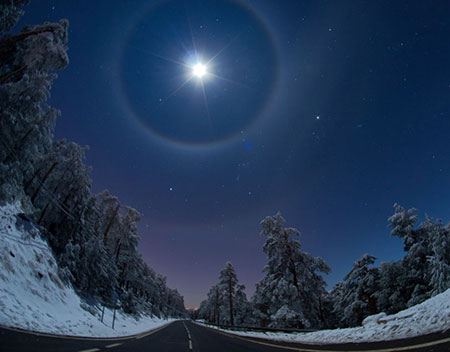 More rare, some moonlight refracts through more distant tumbling ice crystals to form a (third) rainbow-like arc 46 degrees from the Moon and appearing here just above a picturesque winter landscape. Furthermore, part of a whole 46 degree circular halo is also visible, so that an extremely rare — especially for the Moon — quadruple halo was actually imaged. The snow-capped trees in the foreground line the road Puerto de Navacerrada in the Sierra de Guadarrama mountain range near Madrid.

4. A Sun Halo Beyond Stockholm 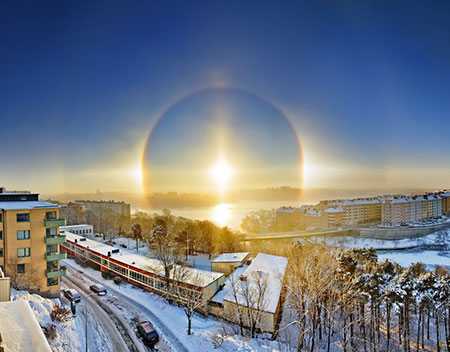 What’s happened to the Sun? Sometimes it looks like the Sun is being viewed through a large lens. In the above case, however, there are actually millions of lenses: ice crystals. As water freezes in the upper atmosphere, small, flat, six-sided, ice crystals might be formed. As these crystals flutter to the ground, much time is spent with their faces flat, parallel to the ground. The above image was taken last year in Stockholm, Sweden. Visible in the image center is the Sun, while two bright sundogs glow prominently from both the left and the right. Also visible is the bright 22 degree halo — as well as the rarer and much fainter 46 degree halo — also created by sunlight reflecting off of atmospheric ice crystals.

3. A Sun Halo Over Cambodia 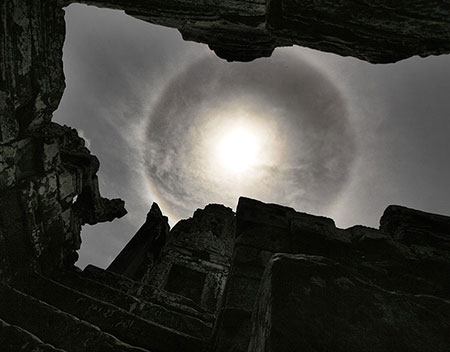 Have you ever seen a halo around the Sun? This fairly common sight occurs when high thin clouds containing millions of tiny ice crystals cover much of the sky. Each ice crystal acts like a miniature lens. Because most of the crystals have a similar elongated hexagonal shape, light entering one crystal face and exiting through the opposing face refracts 22 degrees, which corresponds to the radius of the Sun halo. A similar Moon halo may be visible during the night. Pictured above, a nearly complete sun halo was photographed high above the ancient Bayon temple in Angkor, Cambodia. Exactly how ice-crystals form in clouds remains under investigation.

2. A Halo Around the Moon 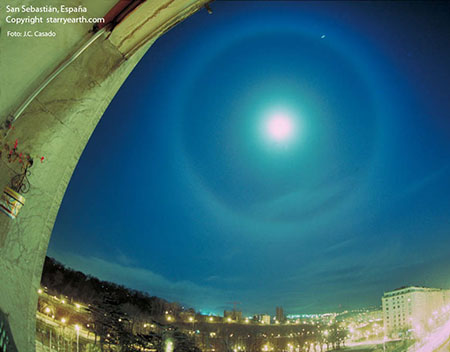 Because most of the crystals have a similar elongated hexagonal shape, light entering one crystal face and exiting through the opposing face refracts 22 degrees, which corresponds to the radius of the Moon Halo. A similar Sun Halo may be visible during the day. The town in the foreground of the above picture is San Sebastian, Spain. The distant planet Jupiter appears by chance on the halo’s upper right. Exactly how ice-crystals form in clouds remains under investigation. 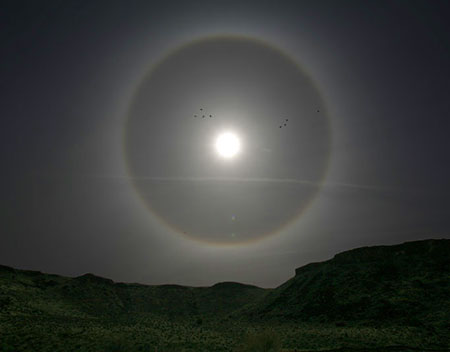 The picture was taken in Gunlock, Utah, USA. A flock of birds was caught by chance in the foreground. Exactly how ice-crystals form in clouds remains under investigation.

They are exactly analogous to sun dogs, but are rarer because to be produced the moon must be bright and therefore full or nearly full. Moondogs show little color to the unaided eye because their light is not bright enough to activate the cone cells of humans’ eyes.